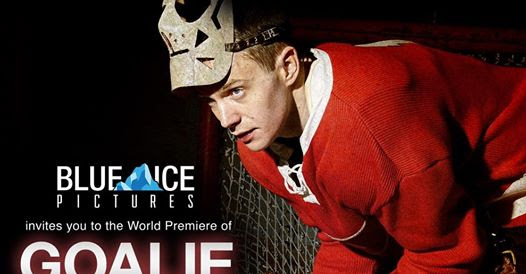 There were six jobs, or as they prefer to refer to it in the film Goalie, six sweaters up for grabs.

In the six team NHL, the so-called Original Six that existed in that form from 1942 through 1967, for all but the last two season of that era, there were no backup goalies on the bench. If you desired to be an NHL netminder, there were just six positions to be filled.

Goalie is the torturous tale of Terry Sawchuk, one of those six unique individuals.

Today, there are people who suggest that the goalies of the Original Six era are overrated, given too much credit.

Mark O’Brien, who portrays Sawchuk in the movie and who devoted much study to the challenges Sawchuk faced during his tenure as an NHL puckstopper from 1950 until his tragic death in 1970, is not of this opinion.

“It’s amazing,” O’Brien said. “It’s such an interesting thing, and we’ve never seen a movie about it before.

“Six goalies and if you have a bad season, and you might never have that job again.”

A puck to the maskless face would deprive Sawchuk of blood and likely remove teeth, but it would not remove him from the game. After a break to be patched up, he’d be right back between the pipes to finish his nightly task.

“I can’t imagine no mask,” O’Brien said. “Not only did he not wear a mask but also the fact that one of the things that made him so good as a goalie was his crouch, but I also think that took a lot of guts.”

Really enjoyed the biopic film Goalie about the troubled life of Terry Sawchuk. Mark O’Brien and Georgina Reilly are wonderful as the leading characters. Highly recommended for hockey fans #SudburyArena

Sawchuk’s crouching style in the net, made necessary by a childhood injury that left one of his arms shorter than the other, also put Sawchuk’s head below the crossbar and therefore, directly in the line of fire.

Adriana Maggs, who directed the film, was moved by what she learned of the abuse Sawchuk and his ilk absorbed after reading a book of poetry about Sawchuk’s punishing legacy written by her father Randall and drawn from interviews with Sawchuk’s contemporaries.

The Show Must Go On

“That is amazing and it’s so much to ask of people. But then the next time that they let one in, the fans are going to turn on them. And I just think it’s such tremendous pressure. And he never stopped. I know other people retired and went back into their lives, but he played until his early, tragic death.”

THIS DATE IN 1967: Terry Sawchuk, then of the @MapleLeafs, became the first goalie in NHL history to record 100 career shutouts. #NHLStats

Sawchuk finished his career with 447 wins and 103 shutouts, at the time both NHL records. Many believe him to be the greatest to ever play the position, but what do you think?