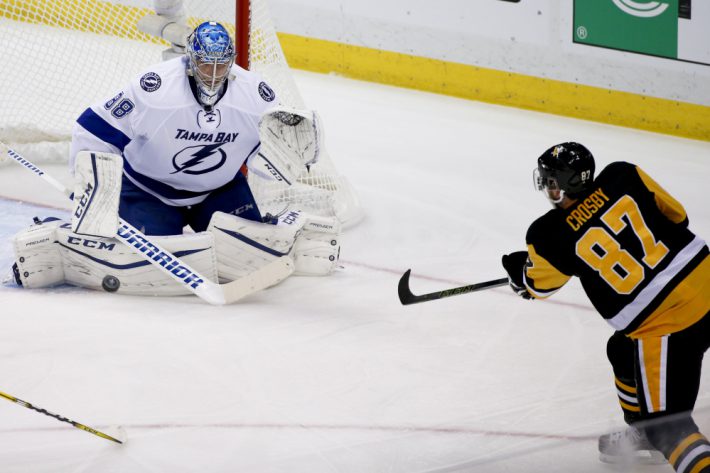 Running away and hiding from the rest of the NHL, the Tampa Bay Lightning were prohibitive favorites to win the 2018-19 Stanley Cup. The sportsbook Bodog has the Lightning at odds of +175 to be Stanley Cup champions. The Boston Bruins, the second betting choice, are a distant +750.

Tampa Bay had it all – great scoring led by Hart Trophy favorite Nikita Kucherov and captain Steven Stamkos, a Norris Trophy-winning defenseman in Victor Hedman and a Vezina Trophy favorite in Andrei Vasilievskiy.

The Wings won an NHL-record 62 games. They posted the NHL’s lowest goals against. They had a Hall of Famer behind the bench in Scotty Bowman and were led on the ice by Hall of Famers like Steve Yzerman, Nicklas Lidstrom and Sergei Fedorov.

And the Wings lost to the Colorado Avalanche in the Western Conference Final.

The Penguins were two-time defending Cup champions and finished the regular season winning an NHL-record 17 games in a row. Captain Mario Lemieux won the scoring title despite missing 24 games while battling Hodgkin’s disease.

Pittsburgh’s bid for three Cups in a row ended with a seven-game loss to the New York Islanders in the second round on David Volek’s Game 7 overtime winner.

Boston was stunned in seven games in the opening round by the Montreal Canadiens and the sensational goaltending of rookie Ken Dryden.

The defending Stanley Cup champion Canadiens went 38-8-4. The Habs netted the most goals in the NHL (228) and allowed the fewest (121). Maurice Richard finished the season as the NHL’s first 50-goal scorer. Punch Line teammates Elmer Lach, Richard and Toe Blake ran 1-2-3 in the NHL scoring race.

Montreal dropped the first two games of its opening-round series at home to Toronto and never recovered, losing to the Leafs in six games.

The Bruins went 38-5-1 in the regular season. Their .875 winning percentage that remains the NHL single-season standard. Boston tallied an NHL-record 179 goals. The  Bruins were the only team to allow fewer than 100, fishing 98 pucks out of their net. Tiny Thompson won the Vezina Trophy.

Shockingly, the Montreal Candiens swept the best-of-three Stanley Cup final from the Bruins 2-0. It was the only time all season Boston lost back-to-back games.

Which of these failed squads was the best to never win the Cup? You tell us.