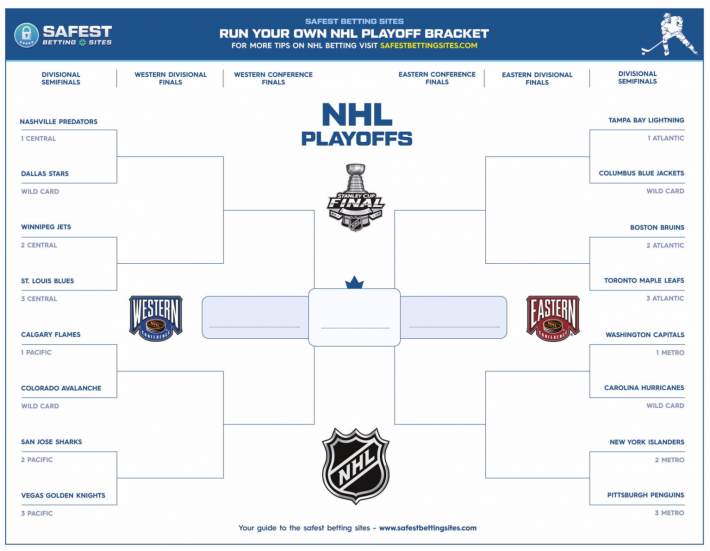 Eight series. Eight chances to be right or wrong.

The Stanley Cup playoffs begin Wednesday. Let’s break down all eight series and then you tell us which series are most likely to provide a first-round upset.

The Lightning tied the NHL record of the 1995-96 Detroit Red Wings by winning 62 games. Tampa Bay was the first team in NHL history to win 30 home games and 30 road games in the same season. Lightning forward Nikita Kucherov led the NHL in scoring.

More than half of the @BlueJacketsNHL’s all-time playoff games have been decided by a one-goal margin (12 of 21).

Overall, 50% of all playoff games since 2014 have been decided by one goal (221 of 444), the highest percentage of any format. https://t.co/sBuZmDZKIl #NHLStats pic.twitter.com/Tq0bO6ymtA

Columbus went hog wild at the NHL trade deadline, loading up because the Blue Jackets know that No. 1 goalie Sergei Bobrovsky and leading scorer Artemi Panarin are both UFAs this summer. But they barely squeaked into the playoffs. Columbus has never won a Stanley Cup series.

En route to his NHL-record 8th career Maurice "Rocket" Richard Trophy, @ovi8 had to fend off a group of top scorers the likes of which he has never seen.#NHLStats: https://t.co/0jOhkqi6Dd pic.twitter.com/1ggWNg6X5U

The Hurricanes will put their Storm Surge post-game celebrations on hold for the postseason. Carolina is in the playoffs for the first time since 2008-09, but the Hurricanes went to the Eastern Conference final that spring. In their previous postseason appearance in 2005-06, they won the Stanley Cup.

The Bruins have won five straight playoff series from the Leafs since 1968-69. Boston F Brad Marchand was one of three 30-year-olds to collect 100 points this season. Both Boston goalies – Tuukka Rask (27) and Jaroslav Halak (22) – were 20-game winners. The last time that happened, with Andy Moog and Rejean Lemelin in 1989-90, Boston went to the Stanley Cup final.

2018-19 marked the third time in League history that three players in their 30s each hit 100 points in a season (also Phil Esposito, Jean Ratelle and Vic Hadfield in 1971-72 and Wayne Gretzky, Adam Oates and Doug Gilmour in 1993-94).#NHLStats: https://t.co/B8gc4hTTnh pic.twitter.com/a6qzTEC5Wg

Toronto hasn’t beaten Boston in a playoff series since 1958-59. The Leafs haven’t won a playoff series since 2003-04. Toronto F Patrick Marleau and Hall of Famer Dino Ciccarelli share the Stanley Cup record for most playoff goals without winning a Cup. Each has 72 postseason tallies. The Leafs recorded 100 points in consecutive seasons for the first time in franchise history.

The Isles have home-ice advantage in a playoff series for the first time since 1987-88. The Islanders went from the NHL’s worst goals-against average in 2017-18 to winning the Jennings Trophy in 2018-19. They haven’t advanced beyond the second round of the playoffs since 1992-93.

The Penguins still have plenty of firepower and captain Sidney Crosby topped 100 points, but they just don’t look the same as the Pittsburgh teams that won Stanley Cups in 2015-16 and 2016-17. Only five teams scored more goals than the Penguins this season. G Matt Murray has lost just one playoff series in his NHL career.

The Avs snuck in as the eight seed in the West for the second year in a row and certainly Colorado can score, led by Nathan MacKinnon and Mikko Rantanen. But Rantanen’s health is in question. Colorado won 17 road games, the low among playoff qualifiers. Calgary led all Western Conference teams with 26 home wins.

Both Nashville (10-5-1) and Dallas (11-5-2) finished out the regular season strongly. The Preds won the Central Division title for a second straight season. F Victor Arvidsson set a franchise single-season record by scoring 34 goals. Pekka Rinne is the reigning Vezina Trophy winner and no team has a better top-4 D than the Preds quartet of Roman Josi, P.K. Subban, Ryan Ellis and Mattias Ekholm.

G Ben Bishop set a Stars single-season record with a .934 save percentage, and Dallas owned the NHL’s No. 2 team save percentage (.922). But the Stars’ goaltending must be outstanding. Dallas ranked 29th in the NHL in goals scored. Trade deadine pick up Mats Zuccarello was supposed to help in that department, but he’s struggled to stay healthy since arriving in Big D.

The Sharks and Flames tied for third in the NHL in goals per game (3.52). San Jose was sixth in the NHL on the power play (23.6 percent). Four Sharks scored 30 goals, six hit for 20 and nine players garnered at least 50 points. In Brent Burns and Erik Karlsson, San Jose suits up two Norris Trophy winners.

The @GoldenKnights return to the playoffs aiming to become the first team since 2009 to win the #StanleyCup the season following a loss in the Final.

The Golden Knights lost seven of their last eight games of the regular season. G Marc-Andre Fleury returned to action for the season finale after missing seven games due to a lower-body injury. Vegas saw its goals per game jump from 3.00 to 3.32 after adding 30-goal scorer Mark Stone from Ottawa at the trade deadline.

St. Louis, which was last in the NHL on Jan. 1, finished the season 20-6-3, while Winnipeg closed 14-14-3. Jets F Patrik Laine has 13 goals in 12 career games vs the Blues. With the return of Josh Morrissey following a 20-game absence with an upper-body injury, Winnipeg has all of its D healthy for the first time since December.

Jordan Binnington of the @StLouisBlues is the ninth rookie goaltender in NHL history to conclude a season with a goals-against average of 1.89 or lower (min. 20 GP) and first since Al Rollins in 1950-51 (1.77). https://t.co/EGjvL6KAy5 #NHLStats pic.twitter.com/L5DTsZaESS

Blues rookie G Jordan Binnington went 24-5-1 with a .927 save percentage and 1.89 GAA. That’s the lowest GAA posted by a rookie netminder since Al Rollins (1.77) with the 1950-51 Stanley Cup champion Leafs. But St. Louis, which hasn’t reached the Stanley Cup final since 1969-70, doesn’t have Winnipeg’s depth of scoring.