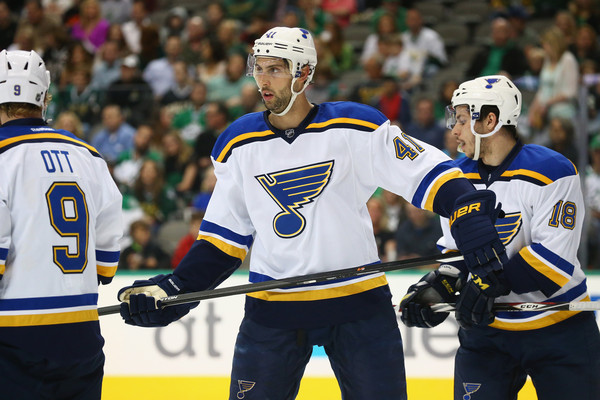 When Robert Bortuzzo swooped in and lifted a backhander past San Jose Sharks goalie Martin Jones to snap a 2-2 tie and spark the St. Louis Blues to a 4-2 victory in Game 2 of the Stanley Cup Western Conference final, it ended a lengthy drought for Bortuzzo.

Robert Bortuzzo's 15th career goal, and first-ever in the postseason, helped the @StLouisBlues enter the second intermission with the lead. #NHLStats #StanleyCup pic.twitter.com/V0n1ilsBPL

It also allowed him to come full circle in a sense when it comes to scoring playoff goals.

The tally was the first for Bortuzzo in 31 career games of Stanley Cup play. In fact, it was his first postseason goal at any level of hockey in more than a dozen years.

Hockey is such a small world in many ways. @StLouisBlues Robert Bortuzzo @rbontuzzo21 scores game winner against his Jr. hockey coaches in Peter DeBoer/Steve Spott tonight. The ex @OHLRangers defenceman scored on a beauty backhander. Funny how it works in hockey. Photo @gordbell pic.twitter.com/WybJMC6iia

On March 23, 2007, in the opening round of the OHL playoffs – and also in Game 2 – Bortuzzo swooped in from the point and fired a wirst shot past Sarnia Sting goalie Parker Van Buskirk to snap a 3-3 tie and give the Kitchener Rangers a 4-3 victory.

We’re guessing DeBoer enjoyed Bortuzzo’s first playoff game winner and lot more than he did the second one.