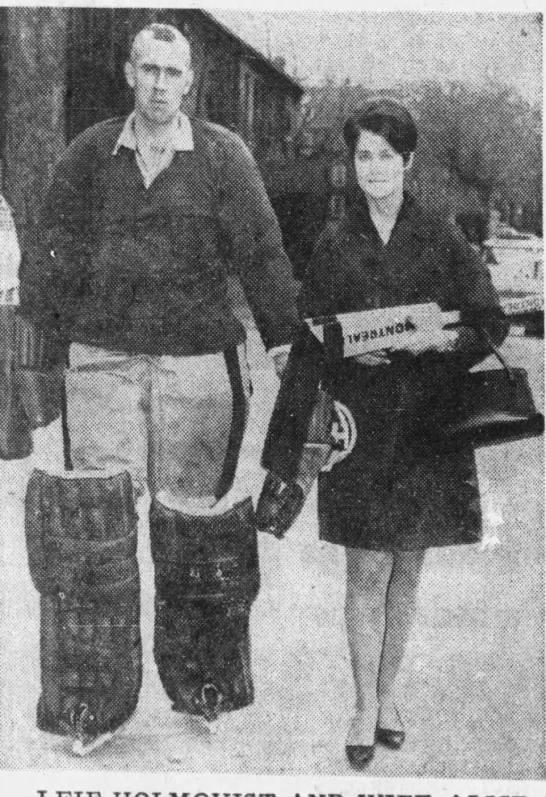 When courting a goaltender, it’s the devoted partner who offers assistance by willingly carrying his sticks.

Actually, this is Swedish netminder Leif Holmqvist, arriving with his wife Alice for a workout with the Boston Bruins in March of 1968. Long before Finland’s Tuukka Rask was winning a Vezina Trophy and Stanley Cup with the Bruins, the club was investigating the best European goalies in the world.

“Yes, of course I’d like a chance to play with the professionals, if it is possible,” Holmqvist explained to the Boston Globe.

Holmqvist was the No. 1 goalie in Sweden. He played in three Olympic Games and seven World Championship tournaments. Holmqvist was inducted into the IIHF Hall of Fame.

“He plays the game the way it should be,” Bruins goalie Gerry Cheevers assessed. “He’s really quick with the glove and quick getting up after he has to go down on a shot.”

No explanation was offered as to why Holmqvist showed up at the rink in full gear. He also displayed an usual piece of equipment for a netminder of that era. Though he went maskless, Holmqvist wore a helmet to cover his head.

Though he didn’t get a chance to see game action with Boston, Holmqvist finally got a taste of North American pro hockey in 1975-76, playing 19 games for the WHA’s Indianapolis Racers.