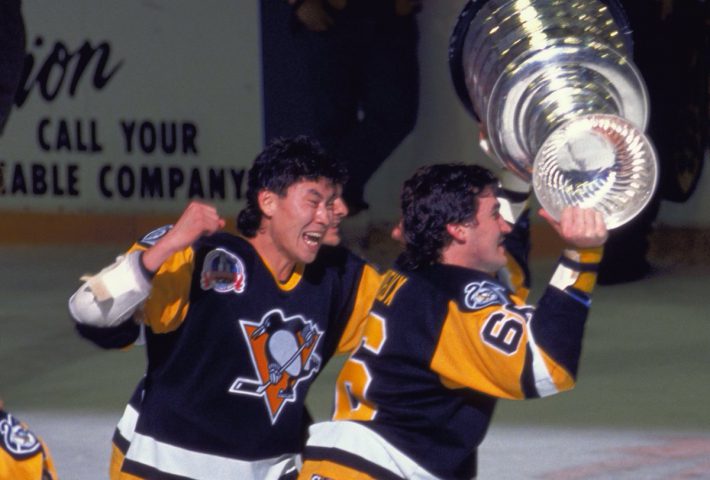 Rookie goalie Jordan Binnington is penning quite the magical story for the St. Louis Blues during the 2018-19 Stanley Cup playoffs. He could soon join the likes of rookie netminders such as Cam Ward, Patrick Roy, Ken Dryden, Frank McCool and John Ross Roach and win himself a Stanley Cup.

Jordan Binnington moved within one victory shy of matching the NHL rookie record for wins in a single postseason. #NHLStats #StanleyCup pic.twitter.com/HniWP0rbc1

Perhaps he’ll even emulate Dryden, Ward and Roy and pick up the Conn Smythe Trophy as well? Why, Calder Trophy finalist Binnington could even join Dryden as a winner of the Stanley Cup, Conn Smythe and Calder Trophies.

However, he will never equal the exploits of Matt Murray and Jim Paek.

Both of them won Stanley Cups as rookies with the Pittsburgh Penguins. And they found it to be so nice, they actually did it twice.

What’s that you say?

No, we didn’t stutter. Paek and Murray are the only two-time rookie winners in Stanley Cup history.

Likewise, Paek – who you might recall coached South Korea at the 2018 Winter Olympics – was a rookie defenseman with Pittsburgh in 1990-91. He suited up for just three regular-season games but when injuries afflicted the Penguins defense, Paek saw action in eight playoff games. He even scored a goal in Pittsburgh’s 8-0 Cup-clinching win over the Minnesota North Stars.

The following season, Paek, still eligible as a rookie, played 49 regular-season games for Pittsburgh and 19 playoff games. He collected three assists in the Penguins’ final sweep of the Chicago Blackhawks, making Paek the only rookie to collect points in consecutive Stanley Cup final series.