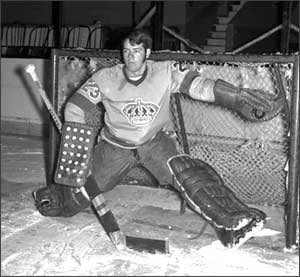 Before he went to the New York Islanders, where he won four Stanley Cups and a Conn Smythe Trophy, Billy Smith was briefly a Los Angeles King.

Smith made his NHL debut Feb. 12, 1972 at the Montreal Forum against the defending Stanley Cup champion Canadiens. The Kings rallied from a 4-2 deficit and it was tied 5-5 when Guy Lafleur netted the game winner with 22 seconds left in the third period in a 6-5 Habs victory.

Smith posted his first NHL victory in his third start, a 5-3 home-ice win over the Buffalo Sabres on March 11, 1972. He made 33 saves and in typical Battlin’ Billy fashion, punctuated his success by dropping the gloves and fighting Buffalo defenseman Tracy Pratt early into the third period.

Smith also fashioned a 4-4 tie with the Pittsburgh Penguins. In a 6-4 loss to Chicago, Gerry Desjardins opposed Smith in the Chicago net. A year later, they’d both be selected by the Islanders in the NHL expansion draft.