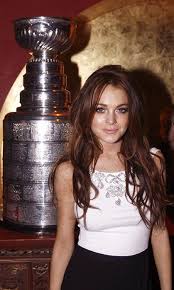 Someone said they wanted to see a photo of Lindsay with the Cup.

Oh, you meant that Lindsay.

Ted Lindsay started the annual tradition of players skating around the ice with the #StanleyCup following Detroit’s Championship win in 1950. Ted wanted to share the Stanley Cup with the fans, who he said paid his salary – so he took it to them. #RIP7 pic.twitter.com/BKzLqLDXq7

Sorry for the misunderstanding.