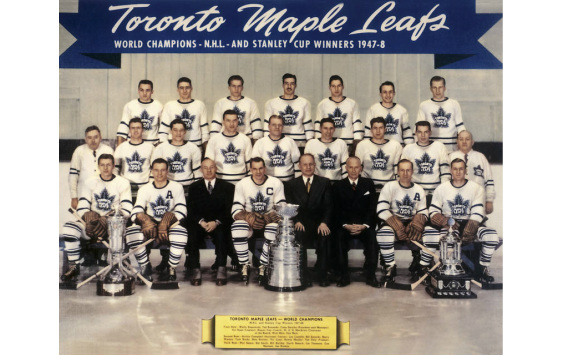 You can’t win ’em all, so the old saying goes. But some teams still managed to win the big one.

Since the birth of the NHL in 1917, a dozen teams that posted losing regular-season records have still managed to fight their way into the Stanley Cup final. Two of those teams – the 1948-4 Toronto Maple Leafs and the 1937-38 Chicago Blackhawks – actually won the Cup despite woeful regular-season marks.

Despite a horrid 14-25-9 slate during the 1937-38 campaign, the Blackhawks grabbed the third and final playoff spot in the American Division because the defending Stanley Cup champion Detroit Red Wings (12-25-11) actually managed to finish two points worse than Chicago.

The previous spring, the Red Wings became the first American-based NHL club to win back-to-back Cups when they captured a best-of-five Cup final series 3-2 from the New York Rangers. At 19-20-9, the Rangers were the first NHL team with a losing record to reach the Stanley Cup final.

In 1949-50, the 28-31-11 Rangers also forced the Red Wings to go the full seven games in the Cup final. In fact, Detroit needed to rally from a 3-2 series deficit to beat the Rangers. Those are the only two Stanley Cup final series featuring a team with a losing record to go the distance.

A year earlier, the Wings were swept by the 22-25-13 Leafs in the 1948-49 final series, giving Toronto its third successive Cup. The Leafs were the first NHL team to win three Cups in a row but came periously close to never getting the chance. In early February, the Leafs sat out of a playoff spot before rallying over the final weeks of the regular season to squeak into the tournament for Lord Stanley’s mug.

“None of us were worried,” Leafs forward Howie Meeker recalled. “We knew we’d come out smelling sweet.”