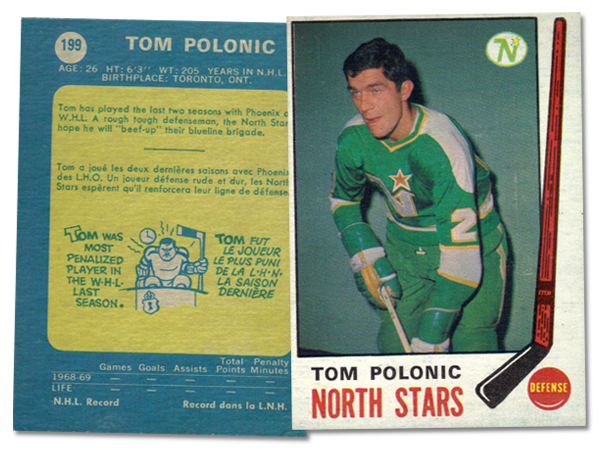 Tom Polanic died on September 22nd at the age of 76. Outside of a few ardent, hard-core hockey fans, not many probably even noticed the death of the journeyman performer, whose pro career included a 19-game stint with the Minnesota North Stars – 16 games in 1969-70 and three more games in 1970-71.

From Toronto, Polanic played junior for the St. Michael’s Majors and skated in the 1961-62 Memorial Cup. He spent two seasons playing NCAA hockey with the Michigan Wolverines before turning pro in 1965 in the Toronto Maple Leafs’ minor-league system.

The Leafs traded Polanic to the WHL Phoenix Roadrunners in 1967, A big rearguard at 6-foot-3 and 210 pounds, Polanic led the WHL with 187 penalty minutes in 1968-69 and was acquired by the North Stars in a 1969 trade. He engaged in one fight as an NHLer, with Wayne Hillman of the Philadelphia Flyers on November 2nd, 1969.

Every player in the NHL strives to make a name for himself. In the case of Polanic, it proved doubly difficult. Perhaps the biggest fight that Polanic was left with throughout his hockey career was getting people to get his name right.

His one claim to fame was his 1969-70 O-Pee-Chee hockey card, the only time Polanic ever appeared as a cardboard hero. But on both the front and back of Card No. 199, his name was incorrectly spelled Polonic.