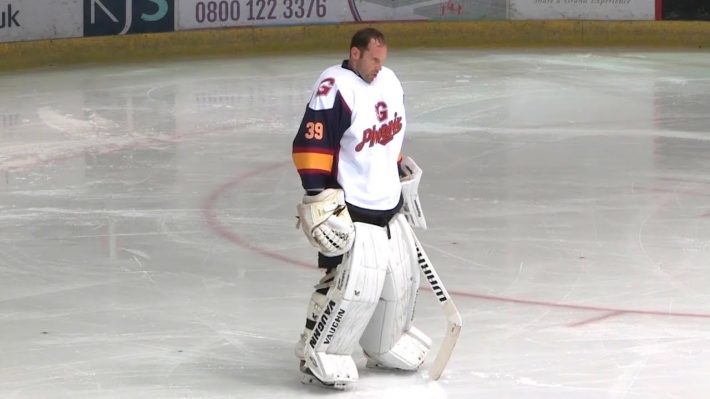 Petr Cech can stop them in front of just about any net, it would appear. The former Chelsea and Czech international soccer goalkeeper returned to his old roots as a hockey netminder this week, playing for the Guildford Phoenix in the fourth tier of British hockey.

In his debut, Cech a UEFA Champions League winner with Chelsea, stopped two shots in the shootout to give the Phoenix a victory.

Several NHL players have also been two-sport stars. Gordie Howe was a top amateur golfer in his home province of Saskatchewan. Wayne Gretzky played semi-pro baseball for the Brantford Red Sox of the Ontario Intercounty League.

Others have made it to the elite level in the NHL, and in another chosen sport. These are just a few of them:

Riley won a Stanley Cup with the 1916-17 Seattle Metropolitans. He played in the NHL for the Chicago Blackhawks and Detroit Cougars in 1926-27.

January 19, 1927: Dallas Steers first baseman and Dallas Ice Kings F Jim Riley is the only player to play in both the NHL & MLB. #TexasOnIce pic.twitter.com/TzF4cnvxym

Riley was also a fine baseball player, and saw action with the St. Louis Browns and Washington Senators of the American League. He’s the only man to play in the NHL and MLB.

James won a Memorial Cup with the Toronto Marlboros in 1954-55. He played 149 NHL games for the Toronto Maple Leafs, posting 14-26-40 numbers and collecting 257 penalty minutes.

After helping the Blue Bombers beat the Hamilton Tiger-Cats 21-7 in the 47th Grey Cup on Nov. 28, 1959, James took to the ice and played 44 games for the Leafs, as well as in the 1959-60 Stanley Cup final against the Montreal Canadiens.

James is the only person to play in the Grey Cup and the Stanley Cup in the same season.

Captain of the Leafs for six seasons and a three-time Stanley Cup winner, Apps was a legend on the ice. Toronto fans would’ve thought Syl could leap tall buildings, and they wouldn’t have been far off.

At the 1936 Summer Olympic Games in Berlin, Germany, Apps represented Canada in the pole vault, finishing ninth. Two years earlier, he’d won the gold medal in the event at the British Empire Games.

Another Olympian, Lammens gained international acclaim for his sailing exploits. He was a two-time world champion in the Finn Class, captained the Canadian national sailing team and competed at the 1992 Barcelona Summer Olympics.

Talking handstands, his NHL career, Olympic sailing, @SkatingSaints
run to '88 NCAA finals, Joe Marsh in a snowbank, and much more!

On the ice, Lammens played 27 games for the Ottawa Senators during the 1993-94 NHL season.

The current GM of the Florida Panthers and 10-season NHL defenseman had links to another sport.

In 1969, Tallon won the Canadian Amateur Golf Championship. In fact, when he was selected second overall in the 1970 NHL amateur draft by the expansion Vancouver Canucks, Tallon was still weighing in which sport he would pursue a pro career.

Nicknamed the Big Train, Hockey Hall of Famer Conacher was voted the Canadian athlete of the half century in 1950. He won two Stanley Cups as an NHL defenseman. In 1936-37, he finished second in voting for the Hart Trophy.

Playing for the Toronto Argonauts in the 1921 Grey Cup, Conacher rushed for 211 yards and scored 15 points as the Argos blanked the Edmonton Eskimos 23–0. He and former NHLer Carl Voss are the only athletes to win the Grey Cup and Stanley Cup.

New York Americans fans are so hyped about Lionel Conacher taking over as player-coach, that Jimmy Thompson made a cartoon about it.

(and mentions that little brother Charlie looks like good stuff too) pic.twitter.com/mvw7VgblsW