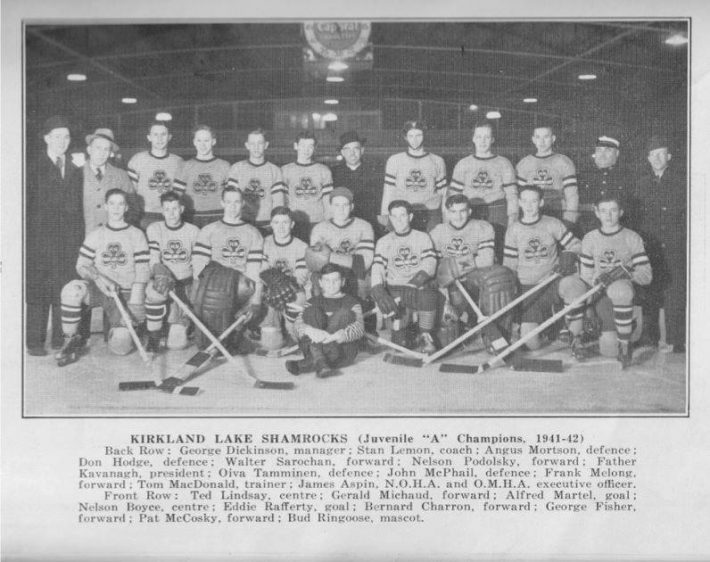 Long before the days when youth hockey was a cottage industry and super teams were assembled, it was a big deal in any Canadian town if one kid off of a team got a crack at the big-time.

Well, the 1941-42 Kirkland Lake (Ontario) Shamrocks did that, times three.

The OHA juvenile A champions that season, they were led by a fiesty left-winger by the name of Ted Lindsay. Lindsay would win a Memorial Cup with the Oshawa Generals in 1943-44 and crack the lineup of the Detroit Red Wings in the fall of 1944.

The future Hockey Hall of Famer would win an NHL scoring title, be selected eight times to the NHL First All-Star Team, earn four Stanley Cups with the Detroit Red Wings and set scoring records for a left-winger. He’d also leave the game as the NHL’s all-time penalty minute leader. Lindsay and Nels Stewart are the only players in NHL history to have finished as the league’s single-season leader in both scoring and penalty minutes during their careers.

Look closely and you’ll see Terrible Ted kneeling to the left of the front row.

Directly over Lindsay’s left shoulder, the first player standing on the left in the second row is defenseman Angus (Gus) Mortson. He’d win back-to-back Memorial Cups with the Generals in 1943-44 and the Toronto St. Michael’s Majors in 1944-45. Turning pro with the Toronto Maple Leafs, Mortson won four Stanley Cups and played in eight NHL All-Star Games. In 1948, Mortson and Gordie Howe had the only fight ever in the history of the NHL All-Star Game.

The third member of this triumvirate only got to call himself an NHLer for part of one season but wouldn’t we all like to be able to say that? On December 22nd, 1948, left-winger Nels Podolsky suited up for the lone regular-season game of his NHL career, playing for the Wings in a 5-2 loss to the Boston Bruins. Oddly enough, Podolsky got his chance thanks to an injury suffered by Lindsay.

My grandpa Nels Podolsky played/roomed with Gordie Howe in Mr. Hockey's 1st pro season. No. 9 was always kind to me https://t.co/s3hjBjo4Rb

He’d be back for the playoffs, and Podolsky would play seven Stanley Cup games, even skating in the Cup final series as Detroit was swept by Toronto. Podolsky turned pro with Omaha of the USHL in 1945-46 and roomed with another rookie who’d later play more games for Detroit than anybody – Howe.

Podolsky is fourth from the left in the back row of the photo.

One youth team, three NHLers. Not a bad output at all considering that back then, there were just six NHL teams.