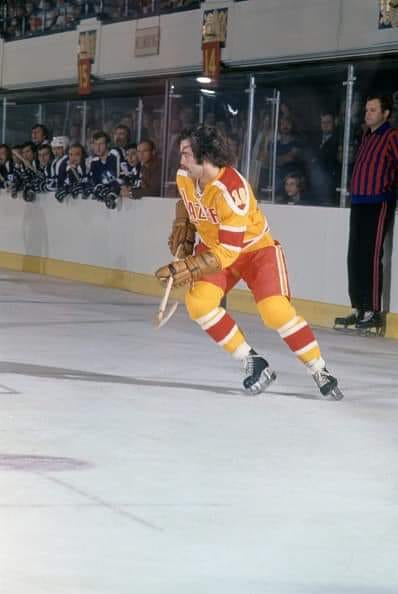 It was 47 years ago this month that the WHA began its inaugural campaign as a major-league rival to the NHL, a journey that was fraught with pratfalls and wrong turns.

Two original franchises were relocated before ever taking the ice. One, the Miami Screaming Eagles, moved up the east coast to become the Philadelphia Blazers.

They would not go down in the annals of WHA history as Blazers of glory, although they looked good on paper.

The Blazers’ home opener was slated for Oct. 13, 1972, playing host to the New England Whalers.

It was Friday the 13th and that would prove to be an appropriate date for this debacle.

“It was a big promotional night,” remembered Tom Webster, one of the visiting Whalers. “The WHA was using blue pucks and everybody in attendance got one.”

It could have been a great game, had it ever started.

The Blazers converted the Philadelphia Convention Hall into a rink, but the price for cutting costs would soon be discovered.

Concerned players noticed the ice cracking underneath them during warmup.

When the Zamboni appeared, that’s when the problems really surfaced.

“[The Zamboni driver] brought it out on the ice and as soon as he dropped the blade, it smashed right into the ice,” Webster said.

“He stopped and picked the blade up. Then he put it down again and this time, it smashed right through. There were puddles of water and you could see the brine coming up through the hole.”

“He comes rushing in and says, ‘You better take a look at this,'” Friday once recalled. “I get out there and the Zamboni is stuck in the ice. The tires were halfway down below the ice surface.

“(Cooper) asks me, ‘What are we going to do?’ So I said, ‘Well, we can put orange cones around the Zamboni and declare that part of the rink off limits.’

“He looks at me and says, ‘That’s a stupid idea.’ And I answer, ‘Of course it is. What do you think we were going to do? We’ll cancel the game.'”

Team captain Sanderson was sent out with a microphone to break the bad news to the 5,000 paying customers.

“He barely got the words out and pucks started flying at him from everywhere,” Webster said. “We were all laughing and ducking.”

That fateful night told much about the future of both teams. While the Whalers thrived and won the first Avco Cup as WHA champions, the Blazers packed up and relocated to Vancouver after one season in the league.

And one unforgettable opener.