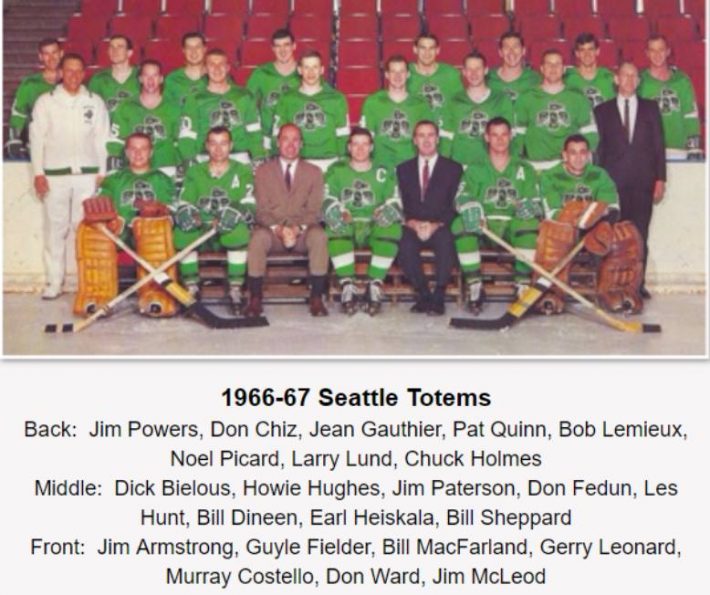 As Seattle prepares to enter the NHL as an expansion franchise for the 2021-22 season, the rich history of pro hockey in Seattle should not be forgotten. In 1916-17, the Seattle Metropolitans of the Pacific Coast Hockey Association were the first American-based Stanley Cup champions.

For several members of the Western Hockey League’s 1966-67 Seattle Totems, certainly NHL expansion was also on their minds. The league would double in size from six to 12 teams for the 1967-68 season, meaning several minor leaguers would soon be NHLers.

Among the group in this team photo, defenseman Jean Gauthier would play 65 games for the Philadelphia Flyers in 1967-68. Right-winger Howie Hughes would suit up for all 74 games with the Los Angeles Kings, scoring nine goals. Defenseman Bob Lemieux saw action in 19 games with the Oakland Seals. Defenseman Noel Picard finished second on the St. Louis Blues with 142 penalty minutes in 66 games.

Pat Quinn, another defenseman for the 1966-67 Totems, was also in camp with the Blues in the fall of 1967 but didn’t fare nearly as well as Picard. Quinn surived to the final cutdown, and was called into the office of assistant coach/GM Scotty Bowman on the eve of the season.

“Would you like to play in the NHL, son?” Quinn once recalled, relaying the story of that meeting. His eyes widening his smile broadening, Quinn bellowed out his answer.

“Well,” Bowman answered, shuffling through some papers on his desk as he spoke, “you’re going to have to play a lot better than that, then.” With that, Quinn was loaned to the Central League’s Tulsa Oilers for the season.

Late in the 1967-68 campaign, he was dealt by the Blues to the Toronto Maple Leafs. Again brimming with a combination of excitement and hopefulness, Quinn once recollected attending training camp with the Leafs in the fall of 1968.

“(Leafs coach/GM) Punch Imlach was addressing the team,” Quinn recalled. “He said, ‘We’ve got a lot of scorers on this team. What I need is a lunkhead.'”

Like a confident sixth grader who knows the answer to the question, Quinn shot his right arm up into the air.

Quinn made his NHL debut and played 40 games for the Leafs during the 1968-69 season but is best remembered for laying out Bobby Orr at Boston Garden in Game 1 of the 1969 Stanley Cup quarterfinal series between the Leafs and Bruins.

When Bruins’ superstar Orr came down ice with the puck, Quinn assumed he was fair game, focused his bombsights on the target and delivered his payload, leaving a wounded Orr puddled in the fetal position.

Next thing you know, they’re re-enacting the Boston Massacre.

”Everybody wanted a piece of me,” recalled Quinn, who forever insisted the hit was clean, figuring referee John Ashley assessed him an elbowing major in order to save both of their lives.

”The fans were screaming for my head. The ones behind the penalty box were pounding on the glass and it came loose and fell in on me. I’m trying to hold the fans back and I look to the cop in the penalty box, but he’s yelling at me for hitting Orr, too.”

Mr. Pat Quinn playing for the Atlanta Flames during the 1972-73 season. #RIP pic.twitter.com/Rx1YsZhqX1

Though he didn’t make the grade as an original with the Blues, Quinn did skate with two expansion clubs during their inaugural NHL seasons – the 1970-71 Vancouver Canucks and the 1972-73 Atlanta Flames.