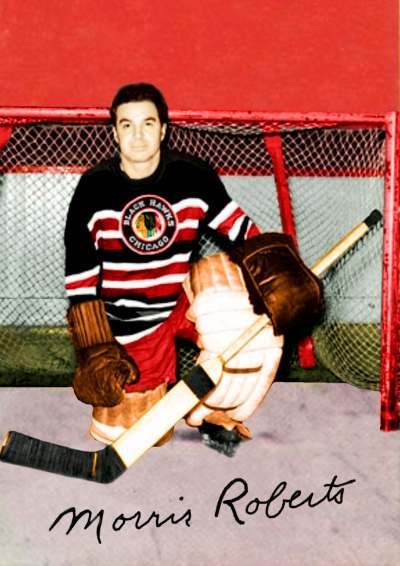 On a night when the Detroit Red Wings momentarily found themselves scrambling to find a goaltender, thoughts harkened back to the date a little of 68 years ago when the pinch-hitter deluxe of emergency goalies entered a game involving the Red Wings.

The Wings were playing the Chicago Blackhawks on Nov. 25, 1951. Detroit won the game 5-2 but that wasn’t the big story of the night.

During the first period, Chicago goalie Harry Lumley twisted his knee. He gamely carried on but during the second intermission, it was determined that he couldn’t continue.

On this day in 1951, 45-year-old Moe Roberts, Chicago's assistant trainer, appeared in his first NHL game in 18 years, when he took over for injure goalie Harry Lumley, in a 5-2 loss to Detroit #Hockey365 #Blackhawks pic.twitter.com/UHtaUc1tAx

In those days, NHL teams carried just one netminder, so Blackhawks assistant trainer Moe Roberts, 45, was pressed into action. He didn’t allow goal during his 20 minutes of work.

Roberts remains the oldest goaltender in NHL history but the crease was far from foreign territory for him.

Nor was pinch-hitting between the pipes.

Oldest To Play a Game in NHL History:

Many years earlier, Roberts launched his NHL career by also stepping into the breech during an emergency situation.

A top amateur goaltender in the Boston area, Roberts was among the crowd of 4,000 who showed up on Dec. 8, 1925 to watch the hometown Bruins take on the visiting Montreal Maroons.

The score was deadlocked 2-2 in the second period when Bruins goalie Charles (Doc) Stewart – himself an interesting character, a dentist by profession who also choose to play goal barefaced and put his molars at risk – lunged out to make a save on Maroons forward Babe Siebert, who accidentally skated across Stewart’s leg, opening a significant gash.

Roberts, who worked as a stick boy and practice goalie for the Bruins, was pressed into action. Just as he would decades later in Chicago, Roberts kept a clean sheet. Jimmy Herbert scored for Boston in the final period and Roberts had himself a 3-2 victory in his NHL debut.

A native of Waterbury, CT, Moe Roberts appeared in 6 games for the New York Americans in 1933-34. He would later serve in WWII and is now a member of the United States Hockey Hall of Fame. #NHL #NYR #Isles pic.twitter.com/z1RiBVXRKp

A member of the U.S. Hockey Hall of Fame, Roberts would play one more game for the Bruins and seven for the New York Americans between 1931-34. But his 20-minute stint for Chicago would be his first NHL action since 1934 and his first puckstopping exploits in organized hockey since 1946.