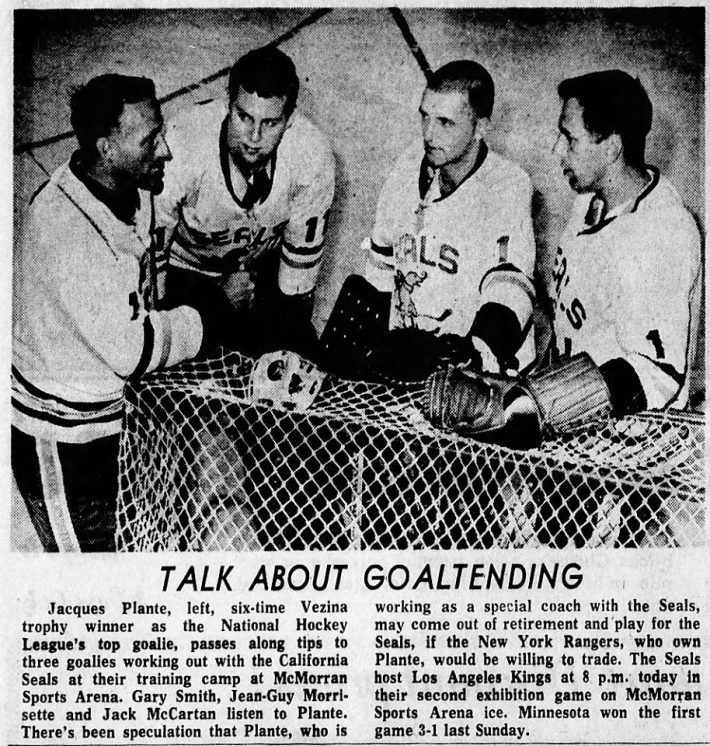 When the NHL doubled in size from six to 12 teams on June 6, 1967, some big-name players ended up dotted amongst the rosters of the six new teams via the expansion draft. That list included five future Hockey Hall of Famers, three of whom were goaltenders.

The Los Angeles Kings selected Terry Sawchuk from the Toronto Maple Leafs. The Philadelphia Flyers a future star from the Boston Bruins in Bernie Parent. The St. Louis Blues tabbed Mr. Goalie himself, selecting Glenn Hall from the Chicago Blackhawks.

The Blues also selected another future Hall member in defenseman Al Arbour from the Leafs, while the Pittsburgh Penguins drafted right winger Andy Bathgate from the Detroit Red Wings.

What isnt’t as well known is that the California Seals also came close to landing a Hall of Fame netminder. The Seals brought in six-time Stanley Cup winner Jacques Plante as a goaltending consultant, which would’ve made Plante one of the first goaltending coaches in hockey history. But it was clear from the outset that Plante appeared to have his eyes trained on replacing his pupils.

On Oct. 21, 1967, the Seals and Kings played an exhibition game in Port Huron, Mich. and the starting goalie for the Seals was none other than Plante. He hadn’t played a pro game since retiring following the 1964-65 season.

Plante played the first 30 minutes of the 3-3 tie. But soon thereafter, he was completely out of the Seals’ picture, both as a goalie and a consultant. The New York Rangers still owned Plante’s NHL rights. The Seals had violated NHL rules by allowing Plante to play in that preseason game, and the Rangers demanded compensation.

Jake The Snake, as he was known, would return to the NHL for the 1968-69 season. The Blues claimed him from the Rangers in the NHL intra-league draft. Teamed with Hall, they won the Vezina Trophy that season and backstopped St. Louis to the Stanley Cup final.