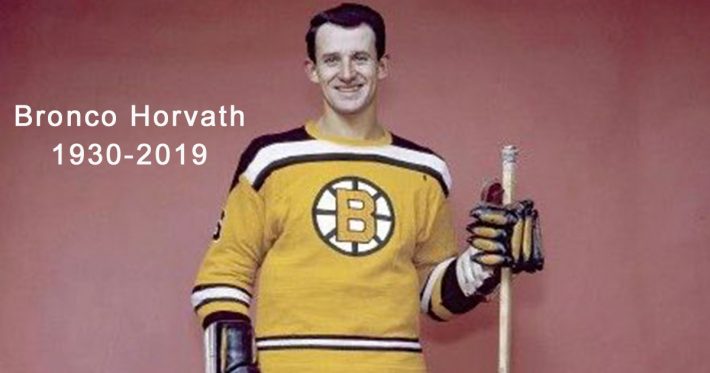 When you think of the great goal scorers in NHL history, Bronco Horvath certainly doesn’t come to mind. But during the 1959-60 season, no NHLer was more productive at lighting red lamps than Horvath, who died earlier this week at the age of 89.

Bronco bucked almost all the great snipers aside. He scored 39 goals, sharing the NHL lead with Bobby Hull of the Chicago Blackhawks. Had there been a Rocket Richard Trophy in those days, Bronco’s name would’ve been inscribed alongside the Golden Jet.

In fact, Horvath looked poised to win the Art Ross Trophy as the NHL entered the final day of regular-season play on March 20, 1960.

With 80 points, Horvath, who topped the NHL scoring race for much of the season, was clinging to a one-point advantage over Hull, 80-79. Coincidentally the Blackhawks were in Boston to conclude the season that night, setting the stage for an epic showdown. 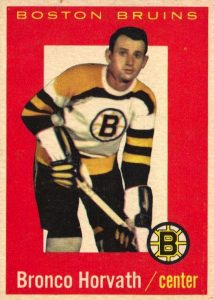 It didn’t begin or end well for Bronco. Late in the first period, the Boston center was struck by a puck in the lower left side of his face and was rushed to hospital with a suspected broken jaw.

While Horvath was undergoing x-rays, Hull lifted a backhander past Bruins goalie Don Simmons at the 5:48 mark of the second period, tying Hull with Horvath in both goals and points.

When the x-rays proved negative, Horvath was rushed back to Boston Garden. As he skated out for the start of the third period, the 13,675 in attendance rose in howling tribute to their hero.

We are sad to report the passing of Bronco Horvath, perhaps best remembered for playing on the Bruins' famous "Uke Line" with fellow Ukrainian-Canadians Johnny Bucyk and Vic Stasiuk. A 2-time All Star, Horvath tied with Bobby Hull for the 1959-60 NHL goal-scoring lead, with 39. pic.twitter.com/mfLhnrhU0J

But there would be no fairytale ending for Bronco. He was held pointless during the game. Boston led 5-4 in the third period when Eric Nestertenko redirected Hull’s feed behind Simmons with 7:50 to play. It was the tying goal for the Blackhawks and the winning point for Hull.

In a journeyman career that saw Horvath score 141 goals in 434 games with six different NHL teams, it was his one shot at glory. After leading the WHL in scoring by netting 50 goals and 110 points for the 1954-55 Edmonton Flyers, Horvath’s NHL rights were acquired that summer by the New York Rangers from the Detroit Red Wings.

A bit of sad news for Rochester hockey fans. Bronco Horvath, one of the greatest ever Rochester players has been given his release by the team. Bronco’s career highlight was as the centre on Boston’s famed “Uke Line” of the late 1950’s. pic.twitter.com/SJshadFguu

Boston selected Bronco from Montreal in the 1957 NHL intra-league draft. Teamed with John Bucyk and Vic Stasiuk on the Bruins’ famed Uke Line, they instantly clicked. Horvath collected 30 goals and 66 points duirng his first season in Boston, finishing fifth in the scoring race. But he was 18 points behind Art Ross winner Dickie Moore of the Canadiens.

A broken jaw limited Horvath to 45 games and 19 goals in 1958-59, the season prior to his explosive campaign. But his 1959-60 output was not a sign of things to come. Following a 15-goal season in 1960-61, the Bruins opted not to protect Horvath and he was claimed by Chicago in the intra-league draft.

After one season and 15 goals for the Blackhawks, Bronco was again exposed in the intra-league draft in 1962 and claimed by the Rangers. He’d scored seven goals in 41 games when New York waived Horvath in January 1963. This time, he was claimed by the Toronto Maple Leafs.

Bronco played just 10 games as a Leaf and was not part of the team when they won the Stanley Cup in the spring of 1963.

MIN asked to keep Horvath after 14 games but Imlach's price was too high, so Horvath returned to the Leafs farm (Rochester) pic.twitter.com/mk9VPr9R5I

He wouldn’t see the NHL again until 1967-68. Loaned to the first-year expansion Minnesota North Stars by the AHL Rochester Americans, Horvath netted his final NHL goal in 14 games. But when the two sides could not work out a deal, Horvath returned to Rochester, where he finished his pro career in 1970.

Horvath was inducted into the AHL Hall of Fame in 2015.