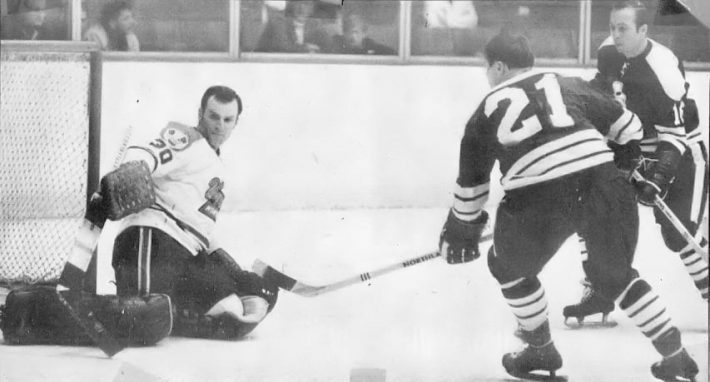 In these days of the salary-cap NHL, six-player deals have gone the way of the maskless netminder and wooden stick.

You just don’t see them anymore.

Even back in the day, they weren’t exactly commonplace. So to be moved in a six-player trade was out of the norm. Well, to be part of two of them – albeit one that was significantly more famous than the other – was really something to talk about.

And if you’re former NHL goaltender Jack Norris, you get to talk about it, because that’s what happened to him.

Norris made his NHL debut with the Boston Bruins during the 1964-65 season, after Bruins goalie Ed Johnston was felled by a hand injury. Norris wore No. 17 and saw action in 23 games, going 10-11-2 with a 3.70 goals-against average and one shutout.

He made his NHL bow on Jan. 31, 1965 at Boston Garden in a 4-2 loss to the Toronto Maple Leafs. Eddie Shack, later Norris’ teammate with the Los Angeles Kings, was the first NHLer to put a puck past him.

Returned to the minor leagues, Norris wouldn’t be mentioned in NHL news again until May 15, 1965. That day, the Bruins traded him, defenseman Gilles Marotte and center Pit Martin to the Chicago Blackhawks in exchange for center Phil Esposito and wingers Ken Hodge and Fred Stanfield in what would become known as perhaps the most lopsided deal in league history.

With the Bruins, Esposito would win five Art Ross Trophies, two Hart Trophies and a pair of Stanley Cups. The Blackhawks were losing Cup finalists in 1971 and 1973 but Norris wasn’t around for either of them. He played just 10 games over two seasons for Chicago.

On June 11, 1969, Norris was claimed from Chicago by the Montreal Canadiens in the NHL Intra-League Draft, ostensibly to replace the minor-league goalie the Habs lost to the Blackhawks in the same draft, a fellow named Tony Esposito, Phil’s younger brother.

Chicago certainly got the better of this exchange involving an Esposito. While Tony posted 15 shutouts in 1969-70 and won both the Calder and Vezina Trophies, Norris spent the entire campaign with the AHL Montreal Voyageurs.

#FBF – Jack Norris played in 25 games with the Kings — all during the 1970-71 campaign. It was the end of his NHL career and he had previously seen action with Boston and Chicago. pic.twitter.com/VrsHpNCVRf

Norris was soon on the move again. On May 22, 1970, the Habs dealt him to the Los Angeles Kings with forwards Larry Mickey and Lucien Grenier for forwards Leon Rochefort and Wayne Boddy and goalie Wayne Thomas.

It was a homecoming of sorts for Norris, who’d spent two seasons with the Western Hockey League’s Los Angeles Blades prior to the NHL’s 1967 expansion that added the Kings.

Born this date, August 5, 1942 Jack Norris. Yet another NHL journeyman who ended up in WHA Oilers silks. pic.twitter.com/PpxBueEaKL

This was the season that Phil Esposto scored an NHL-record 76 goals for the Bruins. He put four of them past Norris.

Jack Norris fled to the WHA to get shot at. A # 1 G in WHA, laid down quality starts. Part of the Espo- Hodge CHI-BOS trade. NHL 20W 3.89GAA pic.twitter.com/r2GlUqvtcw

After one season in L.A., Norris returned to the minor leagues. He jumped to the WHA in 1972, playing two seasons with the Alberta/Edmonton Oilers and two more with the Phoenix Roadunners before calling it quits in 1976.