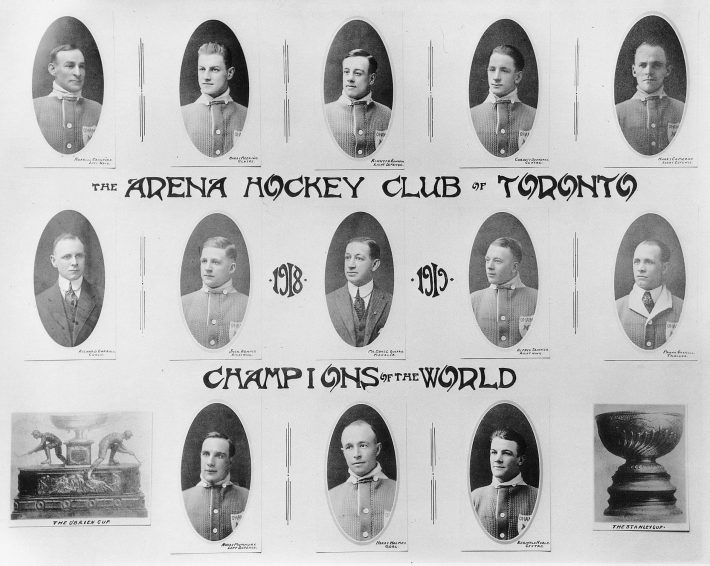 New Year’s Eve games are a staple of the NHL schedule, and have been since the first one was contested on Dec. 31st, 1918.

That night, the unbeaten 2-0 Ottawa Senators visited Mutual Street Arena to face off with the defending Stanley Cup champion Toronto Arenas, who were off to an 0-2 start to the NHL campaign.

Looking to shake things up, Reg Noble replaced Ken Randall on the Toronto defense to start the game. But the game did not get off to a good start for the Arenas.

Cy Denneny converted Eddie Lowrey’s pass from behind the Toronto net to give Ottawa the lead with the only goal of the opening frame. Seven minutes into the second period, Cy’s younger brother Corbett made a sensational solo rush and picked the top corner behind Senators goaltender Clint Benedict to tie the count.

In the third period, Toronto’s Alf Skinner carried the puck down the boards and fed a close-in pass to Corbett, who made no mistake in giving the Arenas their first lead.

Ottawa thought the score was again knotted a few minutes later when Cy Denneny stuffed the puck into a goalmouth scramble. After consulting with the goal umpire, game officials ruled no goal.

Time was also up when Skinner completed the scoring in Toronto’s 4-2 victory, netting the only non-Denneny taly of the night.