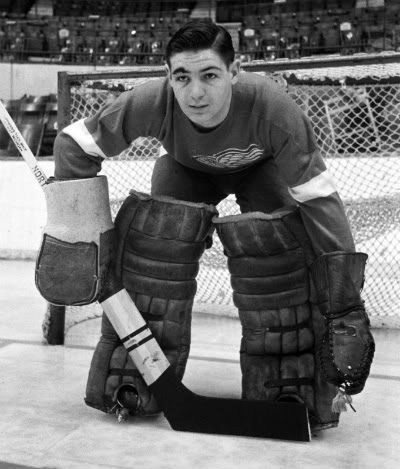 On Jan. 8, 1950, the Detroit Red Wings launched the Hall of Fame career of Terry Sawchuk. The first goalie NHL history to post 100 shutouts and win 400 games made his NHL debut.

Recalled from the Indianapolis Capitols of the American Hockey League to fill in for the injured Harry Lumley, Sawchuk made 22 saves but the Bruins posted a 4-3 victory, paced by a two-goal effort from Sylvio Bettio.

What’s not often talked about is how Lumley was hurt. On Jan. 5, 1950, the Wings played an exhibition game against the International Hockey League All-Stars. The Red Wings took a Harlem Globetrotters approach to the affair, clowning around for the 5,242 in attendance at Olympia Stadium in a game that ended with the un-hockey like final scoreline of 17-10 in favor of the Red Wings.

During the second period, Lumley, goal pads and all, moved up to the Detroit forward line, playing center. He got loose on a breakaway but tripped and fell. Although Lumley later said that he’d felt something give in his left ankle at the time, he kept on playing. A few seconds later, Lumley crashed the net and fell head-first into the boards. This time, his night was over.

After first, fans thought Lumley’s pratfalls were nothing more than part of the evening’s comedy act. After the game, Red Wings team physician Dr. C.L. Tomsu confirmed that Lumley had suffered a serious sprain of his left ankle. 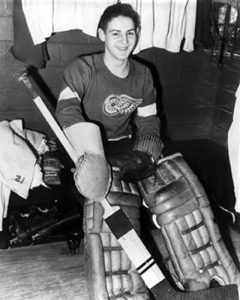 Sawchuk went 4-3 with one shutout and a 2.29 goals-against average during a seven-game stint replacing Lumley. The latter returned to backstop Detroit to a Stanley Cup title in the spring but Detroit general manager Jack Adams had seen enough of Sawchuk to make a major decision.

In the summer, he packaged Lumley to the Chicago Blackhawks as part of a then-NHL record nine-player trade, and clearing the path to the Detroit goal crease for Sawchuk.