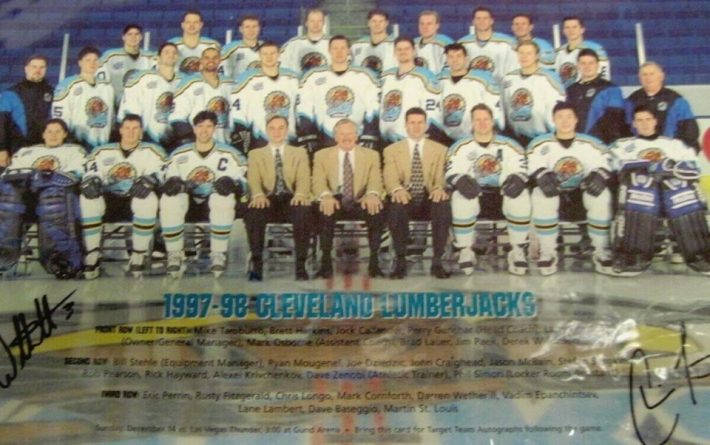 It isn’t often that you find a future Hockey Hall of Famer in the back row of a minor pro team photo. However, if you look closely at this shot of the 1997-98 International Hockey League’s Cleveland Lumberjacks, you’ll locate one.

Undrafted and unwanted by the NHL after his NCAA career with the Vermont Catamounts, right wing Martin St. Louis signed as a free agent with the Lumberjacks following completio of his senior season. He scored 16 goals for Cleveland in 1997-98, earning a free-agent deal with the Calgary Flames.

St. Louis played parts of the next two seasons with the Flames. He scored four goals in 68 games and was released in the summer of 2000. The Tampa Bay Lightning signed the 5-foot-9, 175-pound St. Louis.

St. Louis led the NHL in scoring in 2003-04 as the Lightning won the Stanley Cup, potting 38 goals and dishing a league-league 56 assists to garner the Art Ross Trophy with 94 points. He’d wear a second NHL scoring in 2012-13.

St. Louis retired from the NHL in 2015 with 1,003 points in 1,134 NHL games. He won a Hart Trophy, a Lady Byng Trophy, the Lester Pearson Trophy, an Olympic gold medal and a World Cup of Hockey.

He was inducted into the Hockey Hall of Fame in 2018.