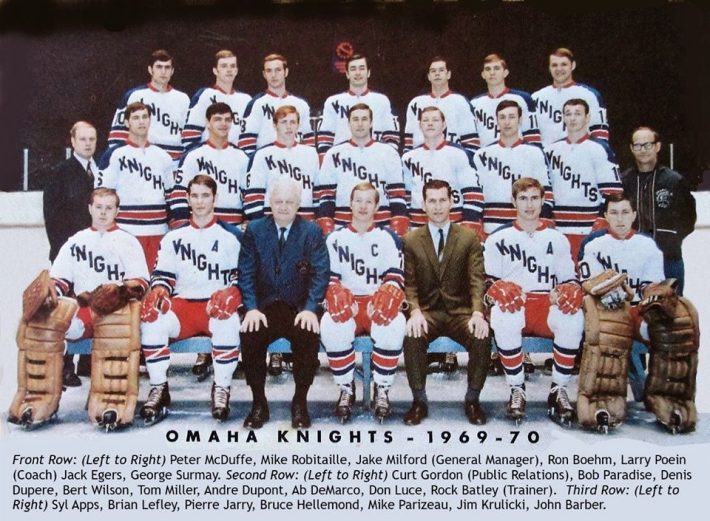 To suggest that the 1969-70 Omaha Knights were loaded would be the utmost of understatements. No less than 16 players off this team would skate in the NHL. Coach Larry Popein and general manager Jake Milford would also earn the right to ply their trade on hockey’s biggest stage.

Perhaps the most recognizable of the players who make the show is defenseman Andre (Moose) Dupont, a two-time Stanley Cup champion with the Philadelphia Flyers in 1973-74-and 1974-75.

In that 1974-75 final, centre Don Luce played against Dupont for the vanquished Buffalo Sabres.

On this day in 1971, the @penguins acquired Syl Apps Jr. and Sheldon Kannegiesser from the Rangers in exchange for Glen Sather #Hockey365 #LetsGoPens pic.twitter.com/rJTV8Y1FcA

The Knights finished first in the Central Hockey League and whipped the Iowa Stars 4-1 in the best-of-seven final to win the league title. Although they were a New York Rangers farm club, just one player – defenseman Ad DeMarco Jr. – played as many as a 100 games for the Rangers.