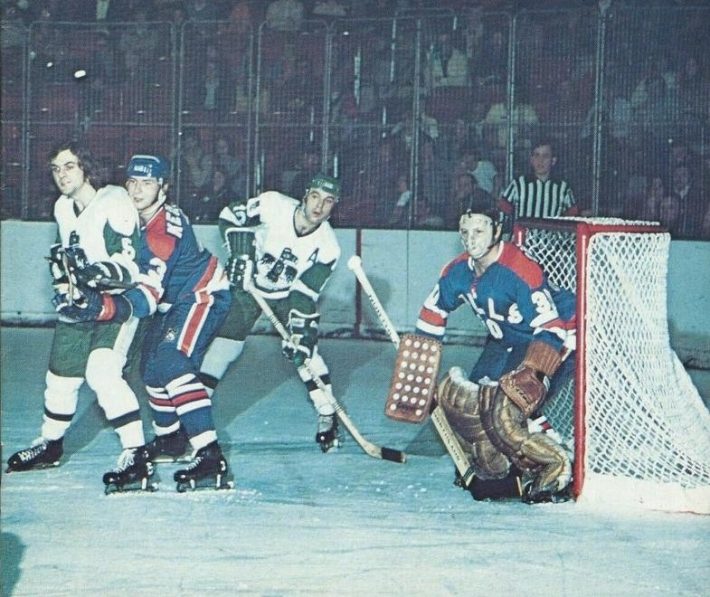 Tending goal here for the San Diego Gulls during the 1972-73 Western Hockey League season, Bob Champoux would make the move the following season to the California Golden Seals, seeing his first NHL action since 1964.

However, that arrival wouldn’t be anywhere near as eventful as Champoux’s NHL debut.

Bob Champoux didn't always play bare handed, but when playing with the Seals, anything out of desperation worked. One & done.17GP 2W 5.20GAA pic.twitter.com/5ZqahzoWBt

Amazingly, it wasn’t until 1965 that the NHL would make it mandatory for teams to suit up a backup goalie. During the Stanley Cup playoffs, teams would recall a netminder from their minor-league system. They would get work in practice and stand by on game nights in case of emergency.

Such an emergency occurred during Game 2 of Detroit’s 1963-64 semifinal series against the Blackhawks at Chicago Stadium. Five minutes into the game, Detroit goalie Terry Sawchuk was felled by a pinched nerve in his shoulder. Champoux (pronounced Shom-poo), who’d spent the season with Cincinnati of the Central League, hurriedly suited up to take over.

The 21 year old made 14 saves as the Wings won 5-4. This development undoubtedly led the NHL to make it mandatory for a backup goalie to be dressed for the 1965 playoffs, a move that was enforced for all games beginning with the 1965-66 NHL season.

Champoux wouldn’t again see NHL game action until he joined the Seals in 1973-74.

On Dec. 7, 1973, recalled because of an injury to Seals goalie Marv Edwards, Champoux was again called upon to enter the game in relief of Ted Tucker to start the third period of a game at Civic Arena against the Pittsburgh Penguins.

Bob Champoux made his #NHL debut with the @DetroitRedWings in a playoff game in 1964. 9 years later he would finally return to the league when he was thrown into the nightmarish shooting gallery of the #California Golden Seals. #Canada #NHL100 #Quebec #LGRW pic.twitter.com/uYoMxTckMZ

He blocked all seven shots directed his way as California rallied to beat the Penguins 4-3.