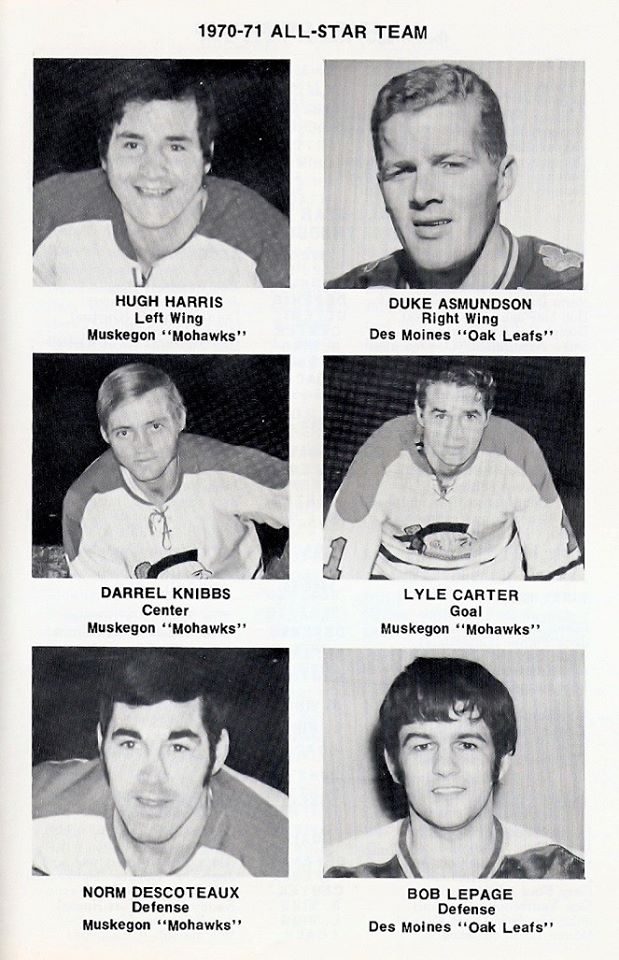 The first thing you notice about the selections to the 1970-71 IHL All-Star Team is that four of the six players were members of the Muskegon Mohawks.

If you know your hockey history, the second thing you should notice is that five of the six selections would end up playing major-league hockey within the next two seasons.

This is impressive, because in terms of pro hockey, the IHL was considered four rungs below the NHL in terms of caliber of play in that era. The AHL was the top minor-pro loop, and both the WHL and CHL were considered to be a step closer to the show than the “I,” as it was known.

ICYMI: Lyle Carter joined @RonMacLeanHTH and @TaraSlone to chat about his well-traveled career and time with the California Golden Seals. pic.twitter.com/T9pI9X6p3u

Still, during the 1971-72 season, Muskegon goaltender Lyle Carter had moved to the NHL, playing 15 games for the California Golden Seals. Muskegon left-winger Hugh Harris was with the Buffalo Sabres in 1972-73, collecting 12 goals and 38 points in 60 games. He’d follow that up by playing six seasons in the WHA.

Three other players on this select squad would all play during the WHA’s inaugural season of 1972-73. Muskegon center Darrel Knibbs skated with the Chicago Cougars.

Get excited! Hockey’s back! Wishing @NHLJets a successful (and healthy) 2019-2020 season. Here’s hoping the boys will go all the way to the Cup final, like their forefathers (Bobby Hull, Bob Guindon and Duke Asmundson) did in 1976-77. (Jeff Debooy / Winnipeg Tribune) #GoJetsGo pic.twitter.com/NxtK08Ouzv

Des Moines right-winger Duke Asmundson was a teammate of Bobby Hull with the Winnipeg Jets. And Muskegon defenseman Norm Descoteaux was a member of the Quebec Nordiques.

Only Des Moines defenseman Bob LePage failed to make the grade in the big time. A one-time member of the Canadian National Team, LePage never made it higher than the AHL in five pro seasons.