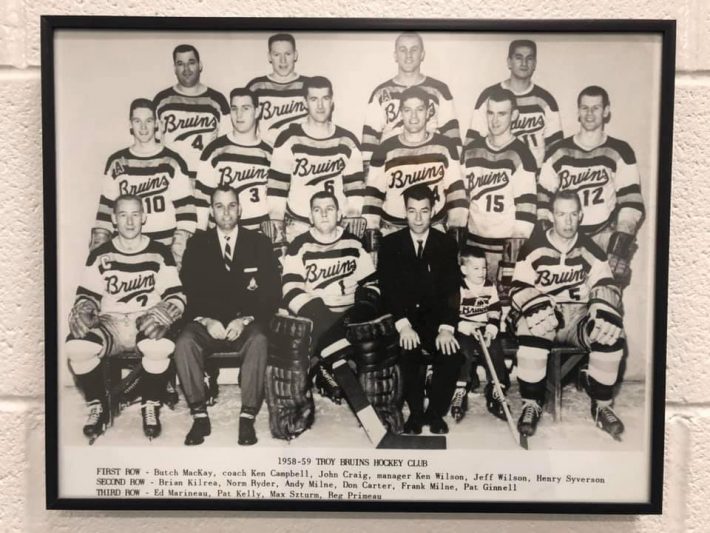 Take a close look at this team photo of the IHL’s 1958-59 Troy Bruins. Bookending the second row are a pair of junior hockey coaching legends.

Wearing No. 10 is Brian Kilrea. He is the dean of Canadian major junior hockey coaches. In charge of the Ottawa 67’s for 32 seasons, Kilrea coached more games (2,156) and won more games (1,193) than any coach in CHL history. Kilrea won three OHL titles and two Memorial Cups. Five times he was named OHL coach of the year. Twice he was CHL coach of the year, an award that is currrently named in his honor.

In 2003, Kilrea was inducted in the Hockey Hall of Fame as a builder.

A center, Kilrea was also a fine player. He won three AHL Calder Cup titles with the Springfield Indians. This season, he led the Bruins with 60 assists and 93 points.

In 1957-58, Kilrea played one NHL game for the Detroit Red Wings. A decade later, he joined the Los Angeles Kings and scored the first goal in franchise history.

At the other end, in sweater No. 12, is Pat Ginnell. He’d coach 15 seasons in the Western Hockey League, originally gaining fame as the bench boss of the Flin Flon Bombers, where he’d coach Bobby Clarke and Reggie Leach.

He guided Flin Flon to the 1966-67 league title. In 1974-75, he was co-coach of the Canadian world junior team that won a silver medal. Four times he was named WHL coach of the year.