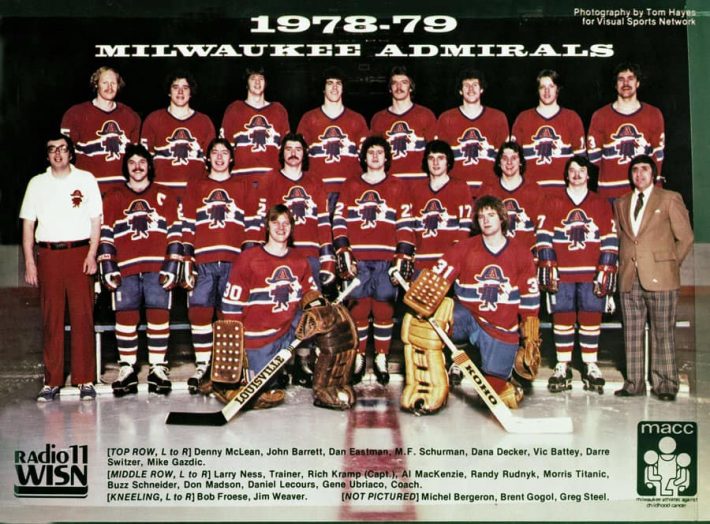 The 1978-79 Milwaukee Admirals included some familiar names on their roster. Coach Gene Ubriaco was a veteran of 177 NHL games, and was an original Pittsburgh Penguin in 1967-68.

Goaltener Bob Froese would win the Jennings Trophy with the 1985-86 Philadelphia Flyers. Defenseman John Barrett played 488 NHL games, most of them with the Detroit Red Wings.

Join us in wishing our teammate #25 Buzz Schneider a Happy 65th Birthday today!

Have a great day #Buzz! 🎉🍵🍻 pic.twitter.com/SYeIt7eTEV

Left-winger Morris Titanic finished as the Admirals’ leading scorer that season with 70 points. Selected 12th overall by Buffalo in the 1973 NHL Amateur Draft, Titanic’s career on NHL ice was sunk after just 19 games with the Sabres.

There was, however, just one miracle worker in the Milwaukee lineup that season. Left wing William (Buzz) Schneider played for the USA at the 1976 Winter Olympics. Even though he’d get a four-game stint with the WHA’s Birmingham Bulls in 1976-77, Schneider maintained his amateur standing, aiming for another Olympic shot with Team USA at the 1980 Winter Games in Lake Placid.

Schneider would make that team. Schneider, Rob McClanahan and Mark Johnson all shared the goal-scoring lead on the squad with five apiece as the Americans pulled off the Miracle On Ice and won the gold medal. Schneider scored twice in the 7-3 win over Czechoslovakia and once in the 4-3 victory over the Soviet Union.

Although 13 of those USA players who go on to skate in the NHL, Schneider was the only one on the roster who’d enjoyed a taste of major-league hockey prior to the 1980 Winter Olympics.