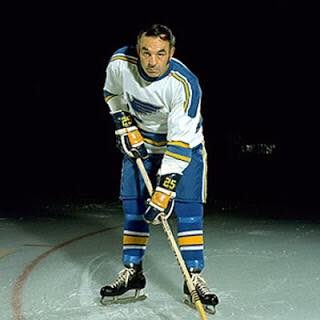 The St. Louis Blues went through a dirty dozen defensemen during the 1972-73 NHL season. There were the Plager brothers Bob and Barclay and Noel Picard, all of them original Blues in 1967-68.

Steve Durbano was among the toughest customers to ever skate in an NHL rink. Andre (Moose) Dupont would go on to win back-to-back Stanley Cups the next two seasons with the Philadelphia Flyers.

Connie Madigan who held the WHL all time record for Penalty Minutes became the oldest rookie at age 38 in NHL history when he played for the St Louis Blues in their 5-1 Win vs Vancouver Canucks.

However, none of them could boast of the storied resume that populated the page under Connie Madigan’s name. When Magidan, 38, stepped on the ice for his first shift with the Blues in a 5-1 victory over the Vancouver Canucks on Feb. 6, 1973, he made history as the oldest rookie ever to play in an NHL game. But that was just one unique notch on the astonishing career path taken by Madigan.

This night in 1973: Connie Madigan becomes NHL’s oldest rookie when he debuts at age 38 for @StLouisBlues in 5-1 win over #Canucks. He was +2. Connie achieves eternal fame when he’s cast as Ross “Mad Dog” Madison in 1977 movie masterpiece Slap Shot @Hanson_Brothers pic.twitter.com/nE19PjtFT9

The Blues purchased the contract of Madigan from the WHL Portland Buckaroos a week earlier for an undisclosed amount of cash and the loan of minor-league forward Andre Aubrey. He’d play 20 games for St. Louis, garnering three assists. Those were the only contests among 1195 games as a pro that Madigan skated in hockey’s highest league.

Madigan had himself a reputation as someone not be be messed with. He was the WHL’s all-time penalty minute leader. He sat out 3242 penalty minutes during his career, three times leading his league in PIM. Over the years, he punched three coaches (Roy McBride, Alf Pike, Rudy Pilous) and one referee (Dave Newell).

Amazingly, his mark as the NHL’s senior rookie might not be Madigan’s biggest claim to fame. He appeared as Ross (Mad Dog) Madison, one of the hired guns brought in by Syrause for the fight-filled Federal League championship game with the Charlestown Chiefs in the hockey cult classic Slap Shot.