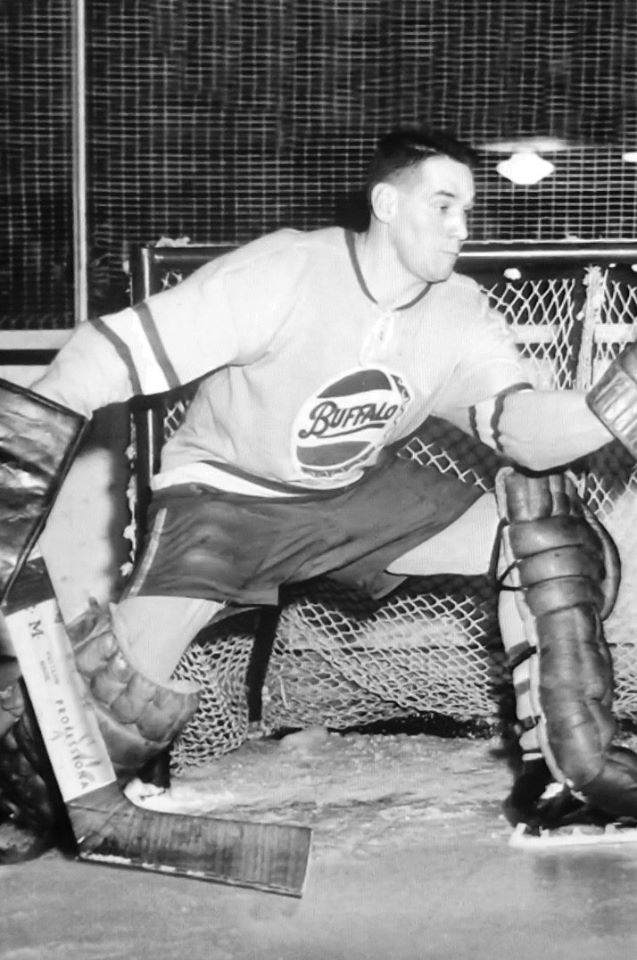 Gerry McNamara’s time with the Toronto Maple Leafs is best recalled from his tenure as general manager of team from 1981-88. But not as many people realize that twice, McNamara was called upon under emergency conditions to fill in as the Leafs; goalie, stints that were separated by nearly a decade.

During the 1960-61 season, Leafs goalie Johnny Bower was leading the Vezina Trophy race in mid-February when he suffered a hamstring injury in a collision with Detroit Red Wings defenseman Howie Young.

After three more seasons bouncing around the bush leagues, McNamara retired from pro hockey in 1964. He ended a two-year hiatus from the game in 1966, joining the OHA Sr. A ranks.

McNamara was toiling in that loop for the Orillia Terriers during the 1969-70 campaign with another crisis hit the Leafs goaltending ranks. Both Bower and Marve Edwards were felled by knee injuries, leaving only Bruce Gamble to tend the Toronto net.

Woefully thin in goal and with Johnny Bower and Marv Edwards both hurt, Leafs have dipped into the OHA Sr. A ranks for Gerry McNamara, whose NHL career consists of 5 games for Toronto in 1960-61. He’ll be Bruce Gamble’s backup pic.twitter.com/SJOea6CeG4

The Leafs again turned to McNamara, bringing him in from Orillia to serve as Gamble’s understudy. He mopped up for Gamble in a 7-1 loss to the New York Rangers, allowing two goals on eight shots over the final 13:36 of the game on Jan. 14, 1970. It had been nearly nine years since McNamara first pulled on a Leafs jersey in that previous emergency scenario.

He’d play the final 10 minutes of a 6-3 loss to the Oakland Seals on Jan. 23, stopping all six shots he faced. And that would be it for McNamara’s NHL career as a goalie. He’d eventually join the Leafs as a scout after hanging up his pads in 1973.