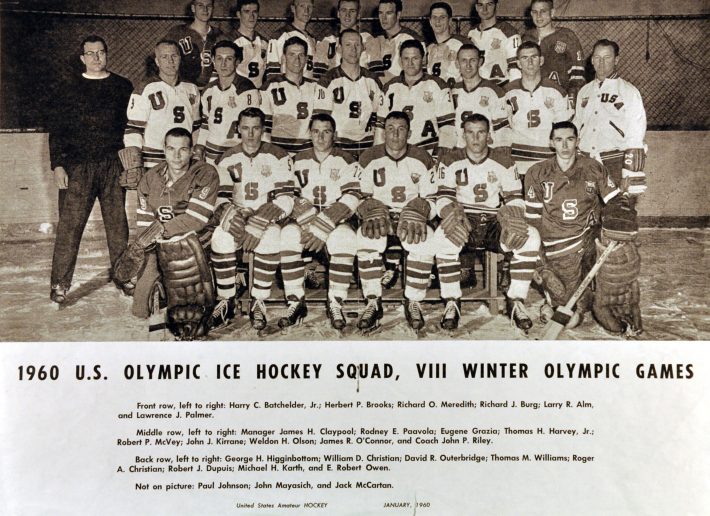 The past week in the USA, it was a non-stop lovefest for the 1980 US Olympic men’s hockey team.

It was 40 years ago that this team comprised of NCAA players stunned the world by winning the gold medal at the Lake Placid Winter Games, including the so-called Miracle On Ice when they beat the reigning world and Olympic champs from the Soviet Union 4-3.

Well the praise is well deserved, what’s sad is that the anniversary of the original US Olympic hockey miracle continues to be shelved and forgotten.

At the 1960 Winter Olympiad in Squaw Valley, Calif, the Americans also won the men’s hockey gold medal. And in some ways, that performance was even more impressive that what was accomplished by the 1980 squad.

USA Hockey wasn’t anywhere near as accomplished in 1960 as it was in 1980. There were no American-born regulars skating in the NHL in 1960. And unlike the 1980 team, in 1960 the USA faced and beat Canada in the Olympic hockey tournament.

Let’s look at some of the parallels between these two gold-medal stunners.

The Americans had won the silver medal at the 1956 Olympics in Cortina, Italy. Five players – Bill Cleary, John Mayasich, Dick Meredith, Weldy Olson and Richard Rodenheiser – returned for the 1960 Games.

USA Hockey finished fifth at the 1976 Winter Games at Innsbruck. Just one player, forward William (Buzz) Schneider, was back in 1980.

Both teams were unimpressive in the run up to the Olympics. The 1960 club was 10-4-4 in pre-Olympic play. They lost to Michigan Tech, Denver and the Warroad Lakers senior team.

In 1980, three days before the Games opened, Team USA was hammered 10-3 by the Soviets.

In the 1960 tournament opener against Czechoslovakia, the Americans trailed 4-3 after two periods but rallied for a 7-5 win.

In the 1980 tournament opener, the USA trailed Sweden 2-1 and earned a 2-2 when Bill Baker scored with 27 seconds left to play and goalie Jim Craig on the bench in favor of an extra attacker.

After winning their next three games, the 1960 squad won 2-1 over Canada. Goalie Jack McCartan was hero, making 39 saves. The next game was against the Soviets. The USA trailed 2-1 and rallied for a 3-2 triumph.

In 1980, the Americans also posted their first win against the Czechs. They went 4-0-1 in pool play to advance to the medal round, where’d they face the unbeaten Soviets. The USA rallied from a 2-1 deficit to win 4-3. Goalie Jim Craig was the hero, making 39 saves.

To win the gold medal in 1960, the USA needed to win one more game, a rematch against the Czechs. Again, they found themselves down 4-3 after two periods.

Soviet captain Nikolai Sologubov visited the US dressing room before the third period and suggested that the team take oxygen to combat the high altitude. They scored six unaswered goals in the final frame and won 9-4. Only four players actually took the oxygen. One who did was Roger Christian. Bill’s brother and Dave’s uncle, he scored three of his four goals in that game during the third period.

To win the gold medal in 1960, the USA needed to win one more game, against Finland. After two periods, the Finns led 2-1. They scored three unaswered goals in the final frame and won 4-2.

Both goalies – McCartan and Craig – would go on to underwhelming NHL careers. Forward Tommy Williams from the 1960 team played 663 NHL games. Thirteen players from the 1980 team would skate in the NHL.