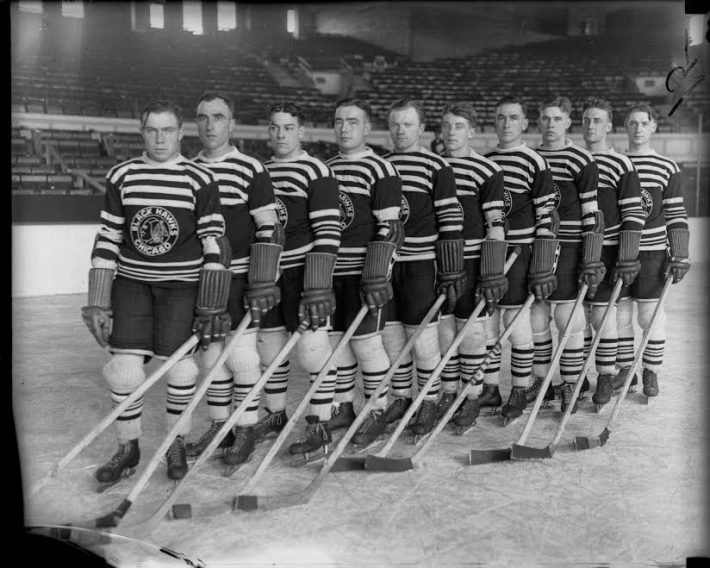 They arrived in Windsor goalless and homeless.

Evicted from their home arena, the Chicago Blackhawks endured a National Hockey League goal-scoring drought that included eight consecutive shutouts and a goalless abyss of 601:41, both which remain league records to this day.

Amazingly, when they finally found the back of the net again, they did so at Windsor Arena.

During the 1928-29 season, Blackhawks owner Major Frederic McLaughlin announced that the club would be moving into the new Chicago Stadium for the 1929-30 campaign. This didn’t sit too well with Paddy Harmon, owner of the Chicago Coliseum, the Blackhawks’ home at the time and he evicted them from the rink for the final two months of the season.

Hot-stove talk is starting to pick up ahead of the incoming hockey season.

Chicago fans have a lot to look forward to, as the team will feature Vic Ripley and Tommy Cook at center this season. Lots of potential in that young duo. pic.twitter.com/AsGzp2qbZC

They played their final nine home games of the season at neutral-site locations – five in Fort Erie, Ont., three at Detroit’s Olympia Stadium and a March 2, 1929 date with the Montreal Maroons at Windsor Arena.

By the time the Hawks arrived in Windsor, they were a beleaguered bunch. A Johnny Gottselig goal at 1:19 of the first period gave Chicago a 1-0 win over Detroit Feb. 5 at the Olympia. It would be the last goal the Blackhawks would register for nearly a month.

Two nights later, they were 1-0 losers to the Americans at New York, and were beaten again by the same score when they met the Amerks Feb. 9 at Fort Erie. Another 1-0 setback was dealt Chicago by the Montreal Canadiens Feb. 14 at Fort Erie, followed by a 3-0 loss to Boston Feb. 16 at Fort Erie.

Coming to Detroit, Chicago again fell 3-0 Feb. 21, this time to Ottawa, then the Hawks battled Detroit to a scoreless tie Feb. 23 that included 10 minutes of overtime play. Detroit handed Chicago a 3-0 setback Feb. 26 at the Olympia, followed by a scoreless overtime tie Feb. 28 against the New York Rangers, also in Detroit.

Crossing the border, Chicago had been shut out in eight successive games as they prepared to take the ice against the Maroons before more than three thousand fans at the barn. You couldn’t blame the Blackhawks’ effort. They pounded Montreal goalie Clint Benedict with 25 shots over the first 40 minutes of play, but the only goal registered in the first two periods was one by Jimmy Ward that gave the Maroons a 1-0 advantage.

Chicago kept working hard and the diligence of the Blackhawks was ultimately rewarded. Vic Ripley took a pass from Ty Arbour and rifled a shot into the corner of the nest just past Benedict’s outstretched leg. At the three-minute mark of the frame, the drought was over, but the Hawks weren’t done yet.

A three-way passing play between Ripley, Arbour and Marvin (Cy) Wentworth finished with Wentworth burying the game-winner in Chicago’s 2-1 decision at the 9:50 mark.

Chicago had ended its streak and also won for the first time in 10 games. Overall, the Blackhawks were blanked in 20 of 44 games that season, another NHL record that stands to this day.