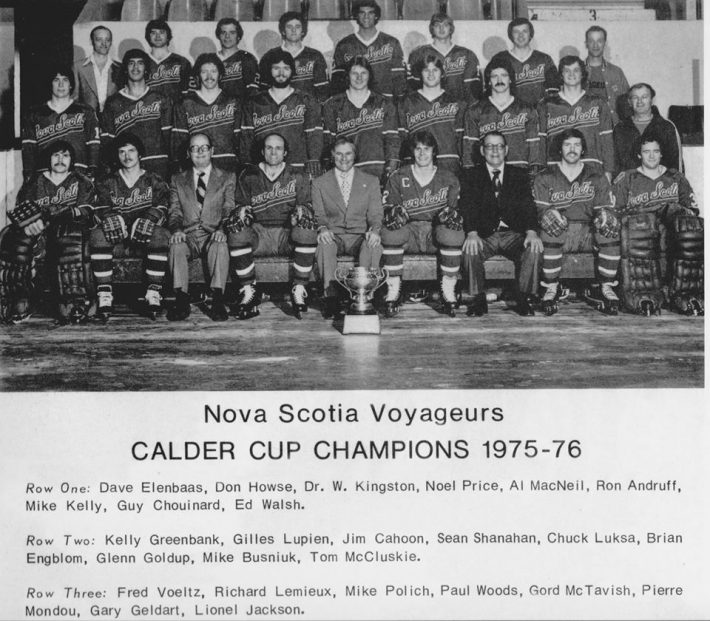 “It certainly was the best team I ever played for,” Shutt said, leaving the decision in the hands of others.

He did acknowledge one fact of life about playing for those great Montreal clubs.

“Our practices were harder than a lot of our games,” Shutt said. “Our line (Shutt, Guy Lafleur and Jacques Lemaire) would go against (Bob) Gainey’s line. We didn’t get checked like that in a game.”

If you think they had it tough, imagine the guys who were trying to crack that lineup.

1975-76 Nova Scotia Voyageurs were Montreal’s AHL farm club. They finished in first place in the Northern Division with a 48-20-8 record and won the Calder Cup title.

In my opinion the greatest hockey team ever was the 1976-77 Montreal Canadiens. 60W-8L-12T. Plus 216 in goals for and against. They outscored opposition by an amazing 2.76 a game. No overtimes or shootouts in Reg games. Imagine Guy Lafleur-Shutt-Robinson-Lemaire-Savard in 3-3? pic.twitter.com/1ER8bKqKoc

Yet only three players off this team – center Pierre Mondou and defensemen Brian Engblom and Gilles Lupien – managed to crack the Montreal linep and become part of this Stanley Cup dynasty.

Forward Mike Polich did get up to Montreal for one regular-season and three playoff games. But he went on to play three full seasons for the Minnesota North Stars. Forward Paul Woods went to the Detroit Red Wings, playing five seasons and 501 games with that franchise.

June 8, 1972: The Canadiens select Steve Shutt with the fourth overall pick at the NHL Amateur Draft, held in Montreal. pic.twitter.com/W7RAnA251r

But none would know what it felt like to be part of hockey’s greatest teams of their era.

“People always ask for a defining moment from my career, but for me, it was just being fortunate enough to play alongside those great players,” Shutt said.