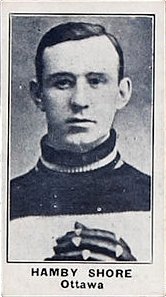 News broke Tuesday that an unnamed Ottawa Senators player was the first NHLer to test positive for the coronavirus.

This knowledge brought about a sad circumstance of symmetry for in 1918-19, during the Spanish influenza epidemic, the previous pandemic to swept the world with this level of fervor, it was also a Senators player who was first to succumb among NHLers.

Thankfully, the current Senators player dealing with the illness is exhibiting mild symptoms and is expected to recover.

Samuel Hamilton (Hamby) Shore was a noteworthy star with the Senators in the pre-NHL days. Joining the senior ranks (there was no pro hockey then), at the age of 19 Shore skated with Ottawa in the famous Stanley Cup series against Dawson City in 1905.

The youngest member of the legendary Ottawa Silver Seven, Shore’s name is inscribed on the Stanley Cup three times. He played in five Stanley Cup series during his career.

He began his career playing left wing but dropped back to defense after Fred (Cyclone) Taylor left the Ottawa club. Shore was regarded as one of the finest skaters and stickhandlers in the pro game. He was known for his rink-length rushes, a powerful shot and as a punishing bodychecker. As well, Shore was a prominent performer at halfback with Ottawa’s football team.

On Oct 15 1918 Senators player Hamby Shore passed away from the Spanish Flu, but next to the story about his death was the list of the local war dead… #historicalthinking pic.twitter.com/esKGw3vTGj

When the NHL was born in 1917-18, Shore was with the Senators but by this time did most of his work as a spare. Performing in 20 games, he collected three goals and eight assists. Late in the season, he began to be slowed by illness, both bouts of flu and sore throat. Shore, who’d previously missed the entire 1908-09 season due to illness, was advised by doctors that hockey might not be part of his future.

How sadly true that diagnosis would prove to be.

Working his offseason job in the distribution branch of the interior department of the Government of Canada, Shore took a leave from work to care for his wife Ruby, who’d contracted the Spanish influenza. As he nursed her back to health, Shore, too, would be stricken.

While Montreal Canadiens defenseman Joe Hall, who died after contracting Spanish influenza during the 1919 Stanley Cup final, is the player most frequently remembered as falling victim to the illness, Shore was the first NHLer to lose his life to the Spanish flu.