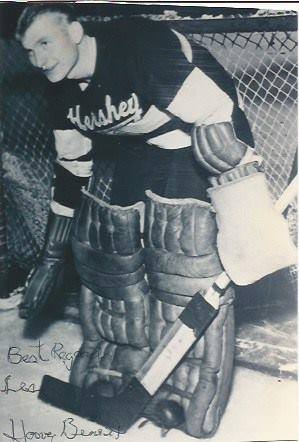 The night of March 18, 1945, a red light illuminated behind Boston Bruins goalie Harvey Bennett and NHL history was made.

At the 17:45 mark of the third period, Montreal Canadiens right-winger Maurice (Rocket) Richard smacked Elmer Lach’s pass past Bennett to tie the score at 2-2. It was Richard’s 50th goal of the season. He became the first NHL player to achieve the milestone.

Bennett hadn’t even started the game in the Boston goal. Paul Bibeault began the night between the pipes for the Bruins. He’d made 17 saves over the first 30 minutes of the contest when Bibeault gave way to Bennett. He’d stop 26 shots but the Habs slipped three past him over the final 2:15 of the contest for a 4-2 victory.

Bennett was far from done the NHL, at least when it came to producing NHLers.

Back to back 30G seasons for ATL gave insight to the potential. Curt Bennett had size & skill, just needed the routine. 580GP 152G 334PTS pic.twitter.com/XKewDMhwUK

Five of his sons would go on to play pro hockey, three of them in the NHL. Left-winger Curt Bennett was the first to make the NHL. He skated from 1970-80 with the St. Louis Blues, New York Rangers and Altanta Flames. Bennett enjoyed back-to-back 30-goal campaigns with the Flames in 1974-75 and 1975-76.

Right-winger Harvey Bennett Jr. debuted with the Pittsburgh Penguins in 1974-75. He suited up for five NHL teams and played until 1978-79. Harvey and Curt were teammates with the 1978-79 Blues.

Left-winger Bill Bennett skated in 31 NHL games with the Boston Bruins and Hartford Whalers from 1978-80.