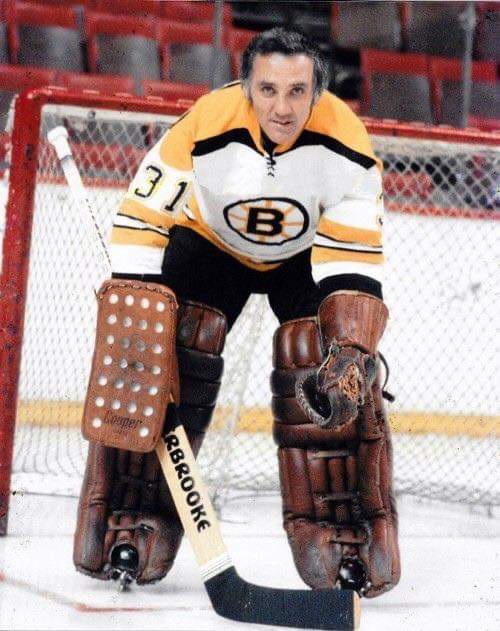 Over his Hall of Fame career, Jacques Plante is remembered for numerous achievements. He was among the early netminders to roam from his net to play the puck in the defensive zone. In 1959, was the first goalie to don facial protection on a permanent basis.

Plante won six Stanley Cups and seven Vezina Trophies. He was selected to seven NHL All-Star Teams. He twice came out of retirement to resume big-league puckstopping chores. Plante, Bernie Parent and Gerry Cheevers were the only Hall of Fame goalies to play in both the NHL and WHA.

What isn’t often remembered is that Plante finished his NHL career with the Boston Bruins. On March 3, 1973, the defending Stanley Cup champion Bruins traded their 1973 first-round draft choice (Ian Turnbull) and future considerations (Eddie Johnston, May 22, 1973) to the Toronto Maple Leafs for Plante and Toronto’s 1973 third-round draft choice (Doug Gibson).

The next night, in his Bruins debut, Plante, 44, blocked 27 shots and blanked the Chicago Blackhawks 4-0. “He’ll win four or five big games for us,” Boston coach Bep Guidolin predicted to Associated Press.

March 4, 1973 – 44-year-old Jacques Plante makes 27 saves in his first game as a Bruin in a 4-0 win over Chicago. The legendary Montreal goalie played 8 games in Boston to end his NHL career. pic.twitter.com/cJ9PHe9Nyp

Plante would finish the regular season 7-1 as a Bruin, with a 2.00 goals against average, a .927 save percentage and a pair of shutouts. He also whitewashed the New York Rangers with a 29-save shutout in a 3-0 victory on March 24, 1973 for the 82nd and final shutout of his NHL career.

That hot streak didn’t continue into the postseason, though. Facing the Rangers in the opening round of the Stanley Cup playoffs, Plante was beaten six times in Game 1, a 6-2 loss. The defeat came amidst published reports that Plante had signed a three-year, $100,000 contract to become coach-GM of the WHA’s Quebec Nordiques starting with the 1973-74 season.

In Game 2, the Rangers again beat Plante and the Bruins 4-2. Guidolin had seen enough. He went with Johnston and Ross Brooks in goal the rest of the way as the Rangers eliminated the Bruins in five games.

It turned out that a third-period tally by Walt Tkaczuk would be the last ever allowed by Plante in an NHL game. He did indeed take that job with the Nordiques. But Plante had one more comeback in him. He returned between the pipes and played 32 games for the WHA’s Edmonton Oilers in 1974-75.