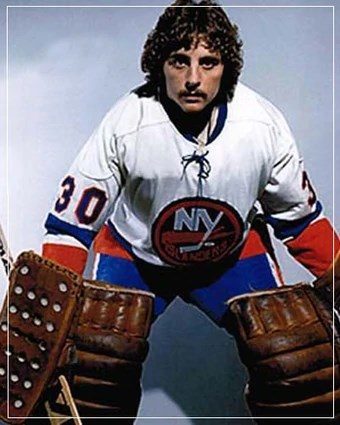 Studying the brief NHL career stats of netminder Don Cutts, initially, nothing jumps off the page at you.

Cutts was one of six netminders utilized by the Oilers during what was their first NHL campaign.

Among this sextet, Eddie Mio would be best man at Wayne Gretzky’s wedding to Janet Jones. Jim Corsi, by mere happenstance, would forever have his name linked to hockey analytics. Ron Low would later coach the Oilers, and was also an original Washington Capital.

Dave Dryden was the less famous member of the Dryden goaltending siblings but is credited as the creator of the current masks that all NHL goalies wear. Bob Dupuis played goal for Canada at the 1980 Olympics. When he beat the Netherlands 10-1 in Canada’s opening game at the Lake Placid Winter Olympiad on Feb. 12, 1980, it was the first victory by a Canadian goaltender in Olympic play since Ken Broderick stopped 27 shots and beat Sweden 3-0 at the Grenoble Winter Olympics on Feb. 15, 1968.

Unlike this group, the claim to fame for Cutts was that he was ECAC rookie of the year with RPI in 1971-72. Or perhaps that he was an IHL First Team All-Star with the Muskegon Mohawks. Then again, it might be his CHL leading goaltender award that he won in 1977-78 with the Fort Worth Texans.

Actually, the 183 penalty minutes Cutts garnered with the Texans in 1978-79 is what kind of jumps off the page at you. That’s a lot of sin bin time for any player, let alone a netminder.

“I’m an aggressive-type goaltender,” Cutts explained to the Edmonton Journal. “I get into the games early, just like a forward who hits people.”

1980: Don Cutts makes NHL debut for @EdmontonOilers with 28 saves in a 3-2 loss at @StLouisBlues https://t.co/194RyJmpyl pic.twitter.com/jFMaZPTV6r

The Oilers signed Cutts as a free agent on Jan. 29, 1980. Four days later, he made his NHL debut. Cutts stopped 28 shots in a 3-2 loss to the Blues at St. Louis. He also was assessed a minor penalty. 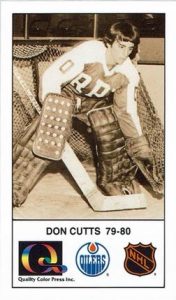 The next night in Los Angeles, Cutts was forced to leave the game when his contact lenses kept fogging up. He stopped eight of nine shots over 21 minutes and got the win in a 8-1 decision, helped by a five-point night from Gretzky.

During a 5-3 victory over the Minnesota North Stars on Feb. 13, 1980, Cutts was pulled from the game in favor of Corsi after Minnesota tied the scored 3-3. He collected two minor penalties in the first four minutes of play, the second of which was served by Gretzky.

The two infractions meant that Cutts finished his six-game NHL career with six penalty minutes. Not many  NHL goalies who can say they averaged a penalty minute per game during their career. And how many can say that their last NHL penalty was served by the Great One?