Skip to content
Loading...
Latest news
What Next For the Buffalo Sabres?
Summer Of Change Could Be Coming For the Calgary Flames
NHL ProteauType: It’s Time To Blow Up Flyers’ Core
Hockey Debates Podcast With Special Guest Ken Campbell
NHL Trade Deadline: Who Scored and Who Missed
Weird Hockey History 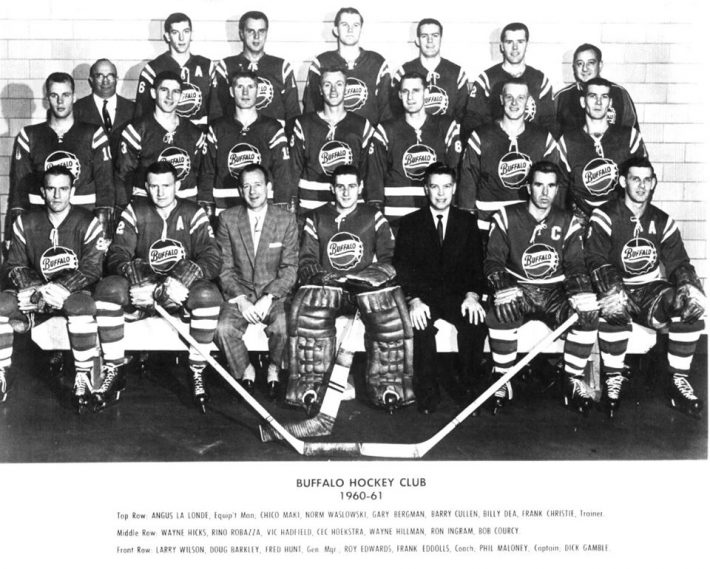 On the ice, the performance of the 1960-61 Buffalo Bisons was nothing to write home about. They finished fourth overall in the American Hockey League regular-season standings with a 35-34-3 record.

In the opening round of the AHL playoffs, they were bounced three games to one by the Hershey Bears.

However, for many players on the team’s roster that season, great things awaited. And for some, they arrived rather quickly.

After Buffalo’s playoff ouster, several players were recalled to the Bisons’ parent club, the Chicago Blackhawks. Forwards Chico Maki and Wayne Hicks, defenseman Wayne Hillman and goalie Roy Edwards would all get their names inscribed on the Stanley Cup as the Blackhawks downed the Detroit Red Wings 4-2 in the Stanley Cup final.

Forward Vic Hadfield would hit great heights in New York. In 1971-72, skating on the GAG (Goal-A-Game) Line with Jean Ratelle and Rod Gilbert, he became the first 50-goal scorer in New York Rangers history. The Rangers retired Hadfield’s No. 11 in 2018.

Vic Hadfield’s 11 officially joins the rest of the GAG Line in the rafters @TheGarden! pic.twitter.com/UQWA6JU2rn

Both Hadfield and defenseman Gary Bergman would be part of Team Canada in the 1972 Summit Series against the Soviet Union.

Forward Larry Wilson and defenseman Doug Barkley would both serve stints as coach of the Detroit Red Wings.

Captain Phil Maloney would coach the Vancouver Canucks. In 1974-75, he guided the Canucks to their initial first-place finish in franchise history.