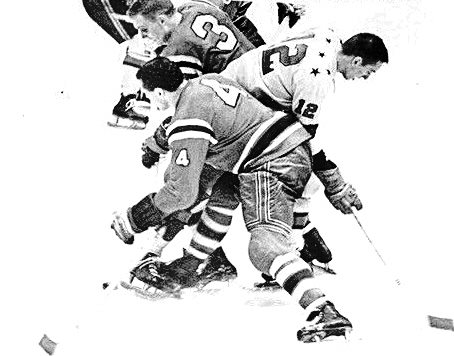 Three players who’d all later win Stanley Cups and who’d each play roles of significance during the 1966-67 NHL postseason come together to form a sandwich in the American Hockey League game between the Rochester Americans and Buffalo Bisons.

Rochester’s Jim Pappin is the meat in the sandwich. His second period goal in Game 6 of the 1967 Cup final between Toronto and Montreal, a centering pass that banked off the skate of Canadiens defenseman Terry Harper and behind Habs goalie Gump Worsley remains the most recent Stanley Cup-winning goal in Maple Leafs history.

Recalled by the NHL Leafs to serve as an extra body during the postseason, Erickson was pressed into duty and suited up for two contests – Game 5 of the semifinals against the Chicago Blackhawks and Game 1 of the Cup final series against Montreal. Wearing No. 24, he only saw the ice during the game against the Habs but that was enough to get his name inscribed on the Stanley Cup. Erickson never played a regular-season NHL game for the Leafs.

Van Impe, who’d later win two Stanley Cups with the Philadelphia Flyers in 1973-74 and 1974-75, skated all six games of the 1967 semifinals against Toronto on the Chicago defense. Although he didn’t collect a single point in the series, Van Impe led all Blackhawks blueliners with 18 shots on goal.