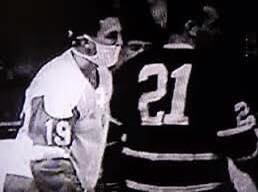 Long before he scored one of the most famous goals in hockey history, winning the 1972 Summit Series for Team Canada over the Soviets, Paul Henderson was a trendsetter. He just didn’t know it at the time.

The 1966-67 campaign was a forgettable one for the Detroit Red Wings. They missed the playoffs, one year after coming within two victories of taking the Stanley Cup. Injuries were so rampant that at one point, the team briefly employed right winger Gordie Howe to take a regular turn on the defense.

This looks like some sort of "time travel" image.
Detroit's Paul Henderson wearing a surgical mask on the ice due to an infection, vs. TOR in Dec. 1966. https://t.co/qbpZp49otS pic.twitter.com/4vIItU7H71

In December of 1966, Wings forward Henderson was sent to Detroit’s Henry Ford Hospital. He’d been troubled with a throat ailment that was causing uncontrollable coughing spells whenever he was skating in a cold arena, and team doctors sought to get to the bottom of the issue.

Specialists examined Henderson and diagnosed him with trachiatis, a viral infection. With the Wings struggling and injury-riddled, Henderson’s first desire was to help the team, and he volunteered to continue to play.

“Chances are he will have to play with a surgical mask on his face, if he plays at all,” Wings coach-GM Sid Abel told reporters.

For people who say that they can't breathe with a mask, NHL player (and Canadian icon) Paul Henderson wore a mask to *help* him breathe in December of 1966 (picture from The Evening News – Sault Ste. Marie, Michigan – 12 Dec. 1966). pic.twitter.com/YagF92aAoF

Henderson would play a few games wearing a mask but he was eventually sent to the warmer climate of Arizona to help cure his virus.

More than a half century later, we’re all being asked to don our masks to avoid spreading another virus, COVID-19. Oddly enough, Henderson’s number with the Wings while he wore his mask was in fact, No. 19.