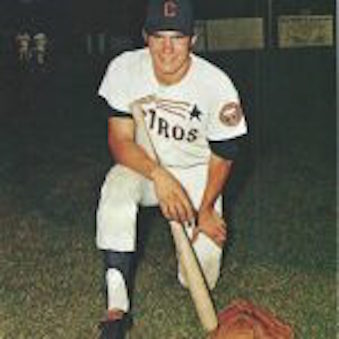 During the reign of the New York Islanders as Stanley Cup champions from 1980-83, one of the most feared players in the NHL was Clark Gillies. Another key cog on that Islanders four-time Cup winner was checking center Bob Bourne.

Had things panned out differently, it’s possibly that both could’ve ended up playing for the Houston Astros. Both Gillies and Bourne, who were from Saskatchewan, turned pro in baseball before ever getting the chance to give pro hockey a try.

Gillies spent three seasons with Covington of the Appalachian League, a Rookie League farm club of the Astros. He was just 16 when he signed with Houston in 1970.

“I didn’t know what the hell I was doing at the time,” Gillies recalled to MiLB.com. “I would get homesick and cry every night because it was the first time I had been away from home. It was quite a change.

“I went from playing baseball with my buddies in Moose Jaw, Sask., to all of a sudden I’m a professional baseball player.”

Bourne was 18 when he joined his future NHL teammate in Covington in 1972. A first baseman, Bourne hit. 257 in his one season as a pro ballplayer. Over his three seasons with Covington, Gillies batted .241. A true utility player, Gillies played outfielder, first base, catcher and even pitched six innings.

Among his teammates was future big-league pitcher Doug Konieczny. For a time, Gillies roomed with future MLB manager John McLaren.

“You could tell he hadn’t played a lot of baseball,” McLaren said. “He was a little bit crude throwing the ball, but he was such a strong man. He had a lot of potential.

“Clark was so strong it was scary. There were times he hit balls he was like a man-child.”

Returning to his winter passion, future Hockey Hall of Famer Gillies helped the Regina Pats win the 1973-74 Memorial Cup prior to teaming with Bourne on the Islanders dynasty.

Interestingly, the fellow who got Gillick’s name on a baseball contract was Houston’s assistant farm director Pat Gillick. Gillick would later build the Toronto Blue Jays into an MLB powerhouse and World Series champions in 1992-93.

There was a third future NHL star who Gillick also sought to sign for the Astros and bring to the diamond, albeit unsuccessfully.

That player was a teenage hockey phenom by the name of Wayne Gretzky.