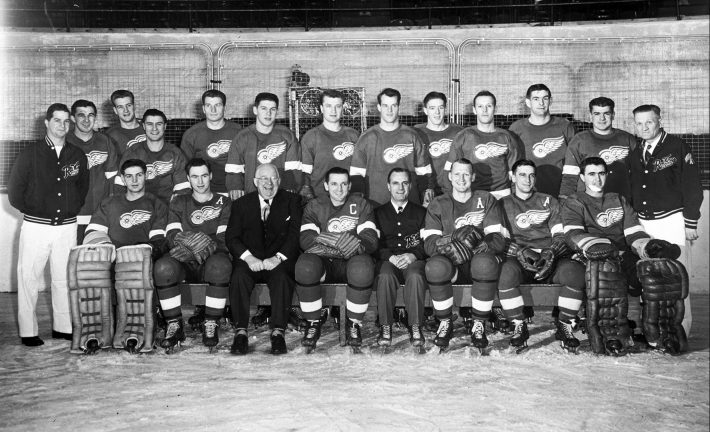 We’re only into the second week of Stanley Cup play and already, the field of unbeaten teams have been reduced to two – the Columbus Blue Jackets and the New York Islanders.

Naturally, with teams requiring 16 victories to capture the Stanley Cup, the odds of any team going 16-0 is infinitetisimal. But the fact of the matter is that it’s always been that way. It’s hard to win playoff games.

On this day in 1952, the @DetroitRedWings won the #StanleyCup 😘 #Hockey365 #LGRW pic.twitter.com/CfGcGV6O4e

NHL teams have been competing for the Stanley Cup since the spring of 1918 and in over a century of competition, just three clubs have been able to run the table without suffering defeat.

The Bruins were the NHL’s best regular-season team, going 26-13-5, and they were even more dominant in postseason play.

Boston faced the Montreal Maroons to open the playoffs and swept the best-of-five series 3-0. The Bruins then faced the New York Rangers in a best-of-three Stanley Cup final, the first-ever Cup final between two American-based clubs, and won it in two straight.

Rookie goalie Cecil (Tiny) Thompson was the star of the show. He allowed just three goals in the five games, posting three shutouts – back-to-back 1-0 wins over the Maroons to open that series and and a 2-0 win over the Rangers in Game 1 of the final. Thompson didn’t allow a single goal at home the entire postseason.

As with the 1928-29 Bruins, goaltending was the story for the 8-0 Wings. Terry Sawchuk posted four shutouts and surrendered a meagre five goals during the playoffs. His save percentage was .963. Like Thompson, Sawchuk did not allow a goal on home ice the entire postseason.

Another tradition was born this spring to celebrate Detroit’s win. An octopus was tossed on the ice at Olympia Stadium in the Cup clincher agains the Montreal Canadiens when Gordie Howe tallied for the Wings to open the scoring. The mollusk’s eight tentacles represented the eight wins required to capture the Cup.

Becoming the first and only team to win five successive Stanley Cup titles, the Habs performed this record feat in fine style. The Canadiens swept the Chicago Blackhawks in the semifinals, opening with a pair of 4-3 wins at home, the second earned when Doug Harvey scored 8:38 into overtime.

Montreal’s Jacques Plante became the first goalie to wear a mask in the Stanley Cup playoffs, and he was especially stingy on the road, posting three shutouts in four games.