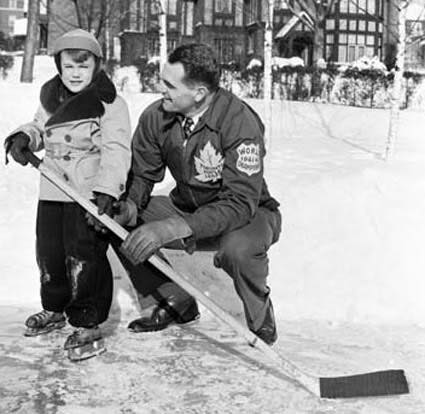 Which one of these two fellows enjoyed a lengthy NHL career?

Well, actually, this is a trick question, because they both did.

The smiling fellow in the Toronto Maple Leafs jacket is none other than Hockey Hall of Famer and longtime Leafs captain Syl Apps. A three-time Stanley Cup champion and five-time NHL All-Star, Apps won the Lady Byng Trophy, twice led the NHL in assists and competed for Canada in the pole vault at the 1936 Berlin Summer Olympic Games, finishing sixth. Leafs owner Conn Smythe described him as the greatest player in team history.

The little fellow on the skates, holding the hockey stick and wearing a determined look on his face is Syl Apps Jr. Like his dad he’d play in the NHL with the New York Rangers, Pittsburgh Penguins and Los Angeles Kings. The younger Apps was the first son of an NHLer to be selected in the NHL amateur draft. A four-time 20-goal scorer, he was named MVP of the 1975 NHL All-Star Game. He was inducted into the Penguins Hall of Fame.

The third generation of the Apps family also produced a hockey star. Gillian Apps, daughter of Syl Jr., won Olympic gold medals with the Canadian women’s hockey team at Torino in 2006, at Vancouver in 2010 and Sochi in 2014. She was inducted into the Brampton Sports Hall of Fame.