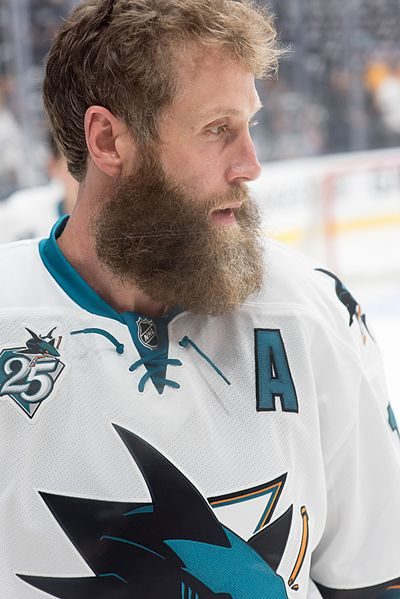 The Sharks are back in the Western Conference final, and facing the same team as they did in the spring of 2016, the St. Louis Blues. Can they win again, and this time around, can they take the winning one step further?

And should they, where will Jumbo Joe’s tale rank among the most romantic endings for long-suffering pursuers of the Stanley Cup?

Andreychuk lost in three conference finals and was in his 22nd NHL season when the Lightning finally got him to the big dance.

In a tightly-contested seven-game series with the Calgary Flames, the Lightning won out. As captain, Andreychuk was the one presented the Stanley Cup by NHL Commissioner Gary Bettman.

Bourque went to the finals twice with the Boston Bruins but when the Bruins were in a rebuilding mode toward the end of Bourque’s career, they dealt the mutliple Norris Trophy winner to the Avalanche.

In his second season with the Avalanche and 22nd NHL season, Bourque got his Cup after the Avs rallied from a 3-2 series deficit to defeat the defending champion New Jersey Devils.

The man, the myth, the moustache. McDonald had done it all during his career – NHL All-Star Game apperances, 50-goal seasons, 500 career goals. There was one box left to tick.

Three years earlier, McDonald and the Flames lost a five-game final series to the Montreal Canadiens. The Habs again provided the opposition in the 1989 final and this time, Calgary won a six-game set.

In Game 6, Flames co-captain McDonald scored to snap a 1-1 tie and give Calgary the lead for good in a 4-2 victory at the Montreal Forum.

Lost in the glory of Bobby Orr’s magical overtime winner was the culmination of Bucyk’s long wait to taste playoff success. He’d lost in the 1958 finals to Montreal in his first season as a Bruin and would wait until 1969 to win another playoff series with Boston.

It was Bucyk’s goal at 13:28 of the third period that sent the deciding game against the Blues to overtime, setting the stage for Orr’s heroics. When NHL President Clarence Campbell stepped on the ice to present the Bruins the Cup for the first time since 1941, he handed Lord Stanley’s mug to Bucyk.

Two years later, Bucyk and the Bruins would win another Cup.