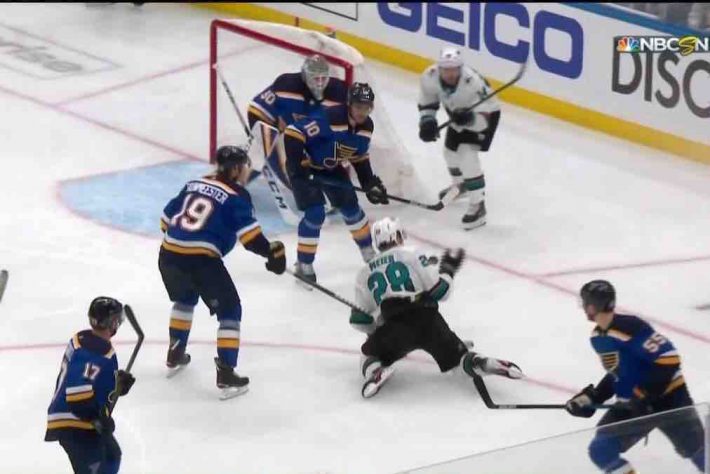 The NHL season could finish on Sunday. The St. Louis Blues own a 3-2 lead in the Stanley Cup final series over the Boston Bruins. But yet again, thanks to another mistaken decision by game officials, the season will not end without controversy.

This is amazing. Not only is the official looking right at the trip but Tyler Bozak immediately looks over because he knows he messed up pic.twitter.com/ixuL2EIR1w

Midway through the third period of Game 5, with the Blues leading 1-0, referee Kelly Sutherland opted not to call St. Louis forward Tyler Bozak for tripping Boston’s Noel Acciari in the Bruins’ end of the rink. Even Bozak knew he’d committed a foul. He turned and gave the look of shame toward Sutherland, expecting to see the referee’s right arm elevated, indicating a penalty.

Instead, the play continued and off that sequence, David Perron netted what proved to be the game winner in the Blues’ 2-1 victory.

It’s just the latest in a series of missteps by NHL officials during these playoffs. Boston coach Bruce Cassidy said after the game that the officials have given the NHL a black eye and who can argue?

Bruins' Bruce Cassidy did not hold back after the Blues' controversial Game 5 win. 😡 😬 #StanleyCup pic.twitter.com/CC9BwI17Gr

But which of the bad decisions during the playoffs had the most damaging effect on the outcome of this postseason?

You decide. Then let us know.

Following a faceoff loss in Game 7 of the San Jose Sharks-Vegas Golden Knights opening-round series, Vegas forward Cody Eakin drove at San Jose captain Joe Pavelski, taking him out with a cross check. As Pavelski was knocked off balance by the cross check, Golden Knights forward Paul Stastny crashed into him. Pavelski went down hard and a facial injury he’d suffered in Game 1 when struck by a puck reopened. Blood spilled on the ice.

Eakin was immediately assessed a cross-checking major and game misconduct. During the ensuing five-minute power play, San Jose scored four goals. The Sharks rallied from a 3-0 deficit for a 5-4 overtime victory and won the series.

The NHL later admitted it was the wrong call and referees Dan O’Halloran and Eric Furlatt were dropped from the officials’ rotation for the remainder of the postseason.

Deadlocked 1-1 in the Western Conference final, the Sharks and St. Louis Blues are in overtime in Game 3 at the Enterprise Center. From his knees, San Jose forward Timo Meier swats the puck with his glove to teammate Gustav Nyquist.

It’s a clear hand pass but the whistle doesn’t blow. Instead, Nyquist passes the puck to Erik Karlsson, who nets the game winner.

May 2 – Blue Jackets Get Goal When Puck Comes Off Netting

Leading 2-0 in the second period of Game 4 of their Eastern Conference second-round series against the Columbus Blue Jackets, the Bruins see their lead cut in half in controversial fashion. A shot by Columbus defenseman Seth Jones is deflected by teammate Oliver Bjorkstrand and goes into the netting above the glass behind the Boston net.

It didn’t impact the outcome though. Boston won the game 4-1.

In Boston for Game 7 for the third time since 2013, everyone knows what the gameplan must be for the Toronto Maple Leafs. It’s do or die, so you play your best players until they drop.

Apparently, everyone knew that except Leafs coach Mike Babcock.

The Leafs lose 5-1 and remain without a playoff series win since 2004.

Retired CBC broadcaster Peter Mansbridge with a hot take on why the Leafs aren't in the Stanley Cup final this year 🏆 pic.twitter.com/CqCQXo4T9A

Geez Babs, even Peter Mansbridge knows that you blew it.