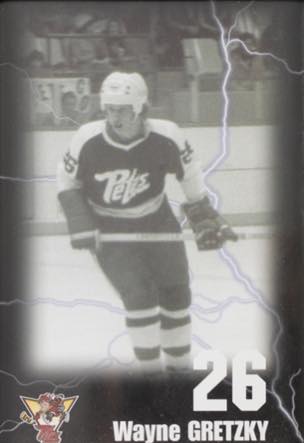 They scoffed at him, said he was too small, too thin, too frail to survive with the big boys. This is 16-year-old Wayne Gretzky with the 1976-77 Peterborough Petes.

Gretzky picked up three assists in three games with the Petes that season. He’d collect 112 assists and 182 points the following season with the Sault Ste. Marie Greyhounds before turning pro with the WHA’s Indianapolis Racers in 1978.

In training camp, Racers coach Pat Stapleton instructed his tough guys to run the frail kid, certain that he couldn’t take it, sure he would end up as nothing more than a pile of broken kindling.

Returning to the bench, Stapleton demanded to know why they hadn’t roughed up the kid. The answer? He was too elusive. They desperately tried to hit him but he was always won step ahead of them.

Wednesday night, the NHL will hand its awards, including the Hart Trophy for league MVP. You know who won the most Harts of anyone?

The too-frail kid showed off more Harts than any of them.