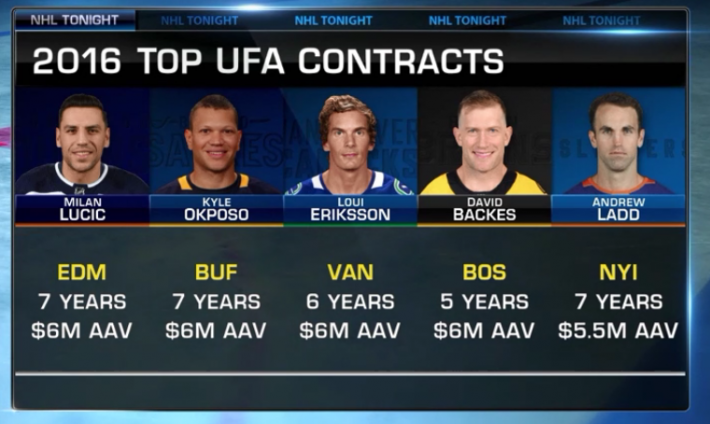 July 1 is like a second Christmas for NHL fans. The offseason is always about inducing hope, and no day on the calendar injects hopefulness into the soul of an NHL fan like the first day that teams can sign unrestricted free agents.

Three years in, how would you grade these contracts? #NHLTonight pic.twitter.com/nYxPO7tQqN

Recently, the NHL Network cited the worst free agent contracts signed by NHL teams in 2016. But hindsight is 20-20. It’s easy to pick out the mistakes years after they were made.

Today’s question is which of the 2019 UFA deals signed thus far this summer will prove to be the biggest bust?

Let’s look at the contenders.

The Predators have been seeking a No. 1 center to lead them back to the Stanley Cup final, where they lost to Pittsburgh in 2016-17. Only this time, they naturally want to take things one step further.

Can Duchene be the answer that Ryan Johansen and Kyle Turris were not?  He enjoyed a strong player with Columbus last spring but Duchene has never been part of a team that’s gone on a long postseason run.

The Hayes experiment in Winnipeg was an unmitigated disaster. Acquired at the trade deadline from the New York Rangers, he was supposed to give them the same boost as a No. 2 center that they got the previous spring from Paul Stastny. But Hayes never meshed in his new role and the Jets were bounced by St. Louis in the first playoff round.

Flyers GM Chuck Fletcher insists this offseason is about changing the culture in Philly. But investing $7 million a season into a second-line center with four goals in 40 Stanley Cup games doesn’t appear to be much of a change for the Flyers.

Weaker teams often get fooled into thinking a bottom-six forward or third-pairing defenseman on a good team will come to their club and fill a larger role. It’s fractured logic. Myers was never a top-pairing rearguard in Buffalo or Winnipeg, and he won’t be in Vancouver. He’ll just be paid like one.

At 6-foot-8, he looks imposing but doesn’t really play that way. He isn’t aggressive and he’s not quick. His analytics are poor. Yes, he’s put up back-to-back 30-point seasons but his puckhandling in his own zone often leaves much to be desired.

The Blue Jackets are going to be the NHL’s version of Humpty Dumpty this season. They reached previously unattained heights last season. But this season, they are in for a great fall. Duchene, Vezina Trophy-winning goalie Sergei Bobrovsky and Artemin Panarin, who registered a team-leading 87 points, all departed.

Unfairly, Nyquist will be looked upon as the guy to pick up that missing offense. Nyquist is a solid, decent player but he is a secondary piece on a good team. That’s the role he filled with San Jose last spring after being acquired from Detroit. But in roster-depleted Columbus, more will be expected from him that he can deliver.

Last season, the tandem of Robin Lehner and Thomas Greiss backstopped the New York Islanders to the NHL’s lowest goals-against average. The Isles decided to low-ball Lehner on a new contract and he bolted for Chicago. In his place, they’ve added Varlamov, which is an intriguing notion.

The Washington Capitals gave up on Varlamov when they couldn’t win in the playoffs with him between the posts. Then Colorado dumped him in favor of Washington back-up Philipp Grubauer. Last season, with a pretty good Avaanche team, Varlamov posted a 20-19-9 record, .909 save percentage and 2.87 goals-against average.

Luckily for him, New York fans are very forgiving sorts.