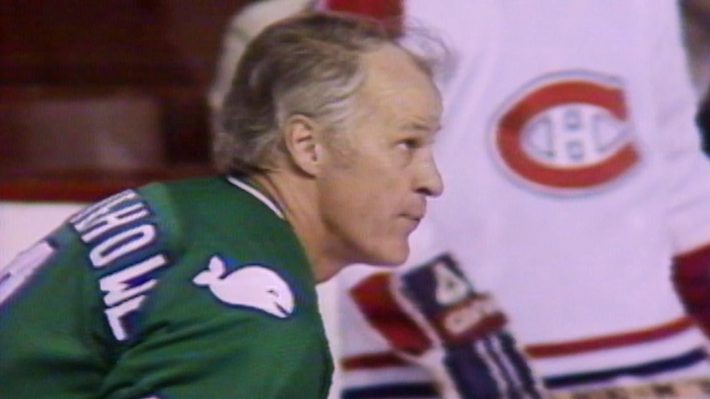 You can stage an argument about the greatest player in NHL history and make a strong case for Wayne Gretzky. Had it not been for knee injuries shortening his playing career, others insist Bobby Orr owns this debate hands down.

Personally, we’ll always go with Gordie Howe. This could be for myriad reasons. Howe could play the game any way you liked. If you were behind a goal, he’d either get it, or he’d set it up. If the puck needed retrieving, he’d go get it. If an opponent required straightening out, Howe could take care of that, too. He could play any position on the ice except goal.

In short, he could do it all.

Statisically, Howe played an astonishing 26 NHL seasons and an awe-inspiring 33 years of pro hockey. He was a major-league MVP in three different decades. He finished among the NHL’s top-1o scorers a record 21 consecutive seasons.

The one number that separate Howe from every player is that he played in the NHL at the age of 52. But it isn’t merely that he played at that age – Howe was an accomplished player during that 1979-80 season. He scored 15 goals and posted 41 points while skating in all 80 games for the Hartford Whalers.

To grasp how impressive that is, let’s transport Howe’s farewell campaign into the 2018-19 NHL season.

He would’ve finished no worse than 10th in scoring on any of the 31 NHL teams last season.

On the Arizona Coyotes, Los Angeles Kings and Vancouver Canucks, Howe would’ve ranked fourth in both goals and points. He’d have been third in scoring for the Edmonton Oilers.

Even had he played for the Stanley Cup champion St. Louis Blues, Howe’s numbers placed him fifth in goals and points.

No wonder they called him Mr. Hockey.