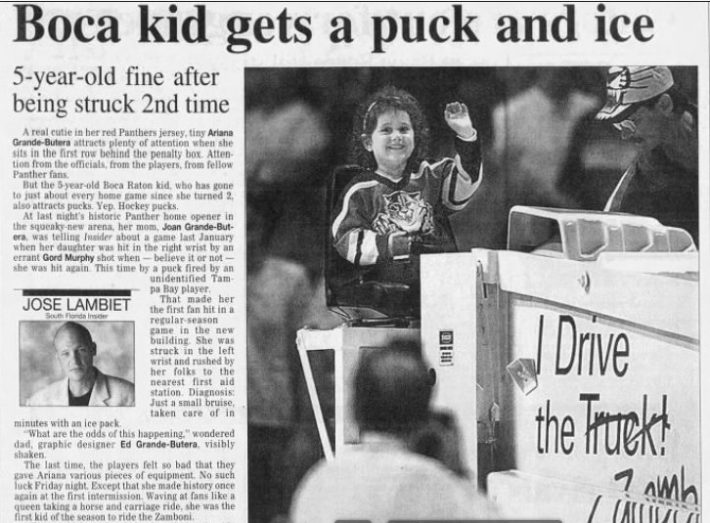 As a youngster, Ariana Grande-Butera stopped two pucks at Florida Panthers games. Last season, that could’ve qualified her to be one of the team’s better puckstoppers. Florida finished 28th in the NHL in goals against during the 2018-19 season.

By the time she was five years old, occupying a seat in the front row behind the penalty box, Grande was struck twice by errant pucks while attending Panthers games – once by Florida defenseman Gord Murphy and once by a member of the Tampa Bay Lightning.

if i’m honest ….. this is still exactly what i look like without lashes and my pony ….. anyone who knows me knows me knows ….. like …. i’m twenty five. i was five here. the only difference now is that hand now says bbq grill finger. pic.twitter.com/rkAbXla1YF

Feeling badly for the young girl, the Panthers supplied her with some signed team equipment. And she was the first fan to ride the Zamboni during intermission when the team opened the BB&T Center in 1998.

Today, that young puckstopper has grown into a show stopper. Grande, 26, is a R&B and pop singer who is a six-time Grammy Award nominee. She won her first Grammy earlier this year. Her record Sweetener captured the Grammy for the Best Pop Vocal Album.

Wonder if she knows the lyrics to the Gear Daddies hit (I Wanna Drive the) Zamboni?