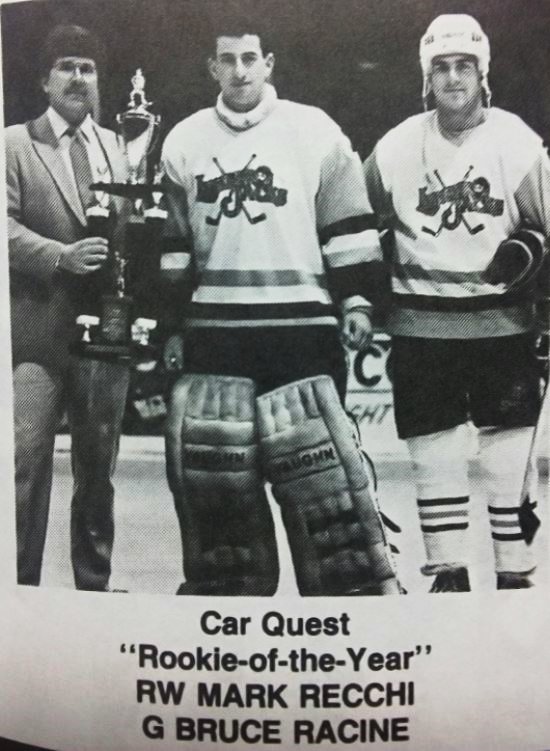 Little did the Muskegon Lumberjacks know that they’d be connecting themselves to two sports halls of fame when the IHL club announced their 1988-89 rookie of the year winners.

Right wing Mark Recchi and goaltender Bruce Racine were co-winners of the award.

When he scored in Game 2 of the 2011 final at the age of 43, Recchi became the oldest player to net a goal in a Stanley Cup final game.

In 2017, Recchi was inducted into the Hockey Hall of Fame.

Racine’s claim to Hall of Fame status wasn’t as straightforward. Following a stellar college career at Northeastern, Racine spent 15 seasons as a pro, but saw action in just 11 NHL games, all with the 1995-96 St. Louis Blues. 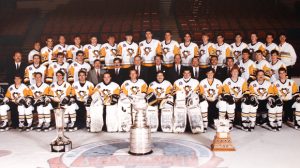 Though he didn’t get his name of the Stanley Cup with the 1990-91 Penguins, Racine dressed for four games as a backup goal during that playoff run, and he’s included in the team photo of that Stanley Cup-winning squad.

His father Moe is a legend in the Canadian capital city of Ottawa. The elder Racine spent 17 seasons as an offensive lineman and placekicker with the CFL’s Ottawa Rough Riders from 1958-1974.

His worked as a kicker earned him the nickname Moe The Toe. He led the Eastern Conference in scoring in 1966.