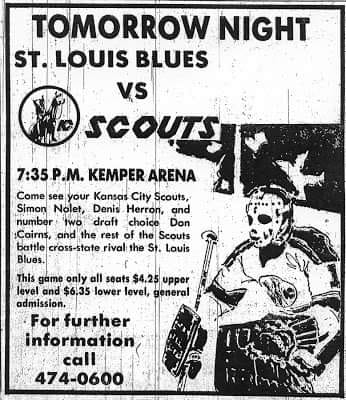 On this date in 1974, the NHL staged its first game in Kansas City. It would not be a long love affair.

The Kansas City Scouts were one of two NHL expansion teams who began play for the 1974-75 season, along with the Washington Capitals. Delays in the construction of Kemper Arena caused the Scouts to camp out on a long jamboree to launch their history, opening with eight games on the road.

By the time they got to their home opener Kansas City was already deep in an 0-7-1 hole. The Scouts would lose their first home game 4-3 to the Chicago Black Hawks and would finish their inaugural campaign 15-54-11.

The second season, things got much worse. The Scouts went through three coaches – Bep Guidolin, Sid Abel and Eddie Bush – en route to an 12-56-12 campaign.

Off the ice, trouble was also brewing. There was speculation in late February of 1976 that ownership might not be able to make payroll. If the team didn’t sell 8,000 season tickets by the summer, the Scouts could be relocated to another city.

A bid by the owners of the NBA’s Kansas City Kings to purchase the franchise was terminated in May. An attempt to put together another local ownership group never came to fruition. On July 26, 1976, the NHL announced the team was moving to Denver, where the Scouts became the Colorado Rockies.

In 1982, the Rockies would also move on, becoming the New Jersey Devils.

The Scouts weren’t the worst of the NHL’s short-lived homes. But they were close.