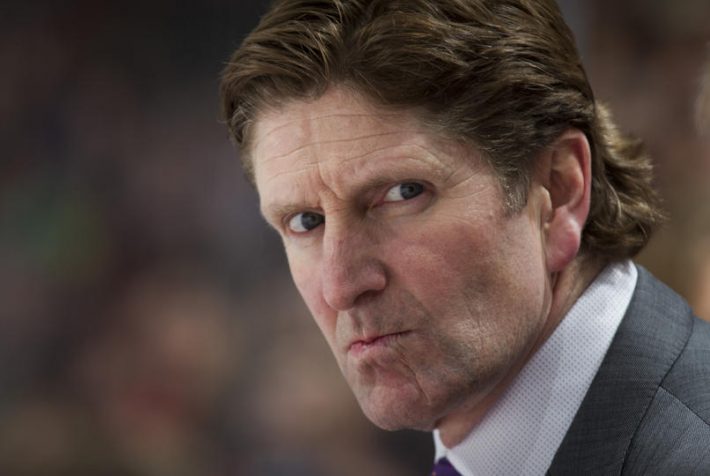 Like the old REM hit suggests, everyone hurts sometimes. And in hockey, everyone fails sometimes . . . even the all-time greats of coaching.

Mike Babcock was fired on Wednesday by the Toronto Maple Leafs, less than five seasons into his record eight-year, $50-million contract to coach the team. Evidently, that #LeafsForever hashtag does not apply to coaches.

Babcock’s first NHL coaching stint with the Anaheim Ducks saw him take that club to their first Stanley Cup final appearance in the spring of 2003. The Ducks lost in seven games to the New Jersey Devils.

Moving to the Detroit Red Wings, Babcock guided the Wings to their most recent Stanley Cup title in 2008. He’d also coached Canada to consecutive Olympic gold medals in 2010 and 2014.

the moment mike babcock was fired

Babcock was viewed as the savior who would finally lead the Leafs out of the wildnerness and to their first Stanle Cup championship since the spring of 1967. But it just never clicked. The Leafs went 0-for-3 in playoff series under Babcock’s tutelage. With the team currently out of a playoff spot and mired in the midst of a six-game losing streak, Leafs president Brendan Shanahan showed his high-priced bench boss the door.

tough life decisions ahead for Mike Babcock, please keep him in your thoughts during this difficult time pic.twitter.com/UWZQ9xu3Bk

Babcock is hardly the first highly sought after coach to stumble at some point in their careers. In NHL history, 11 coaches have won at least three Stanley Cups. Of that group, five members – Toe Blake (8), Hap Day (5), Glen Sather (4), Jack Adams (3) and Pete Green (3) – only coached one NHL team. The other six among this select listing of coaching genius all failed to launch at least once during their NHL coaching days.

Bowman started in St. Louis and led the Blues to three Stanley Cup final appearances in the team’s first three NHL seasons. Moving to Montreal, the Canadiens were five-time Cup winners under Bowman. He also won one Cup with the Pittsburgh Penguins and three with the Wings.

Buffalo, though, was an entirely different story. Hired by the Sabres in 1979, Bowman took Buffalo to the Stanley Cup final four in his first season but that was as good as it would get. There would be just one more playoff series win for the Sabres under Bowman, and the team would miss postseason play during the 1985-86 season, his last full campaign in charge.

Arbour also began his NHL coaching career in St. Louis. He went 1-for-4 in playoff series, getting the Blues to the 1972 semifinals, where they were swept by the Boston Bruins.

Al Arbour fired as Head Coach by the St Louis Blues on November 8, 1972.

Taking over the New York Islanders in 1973, Arbour led the Isles four straight Stanley Cup wins and five in a row.

Irvin won a Stanley Cup in Toronto and three more with Montreal. He launched and finished his NHL coaching history with the Chicago Blackhawks.

Although he did get the Hawks to the 1931 final, he never won a Cup in Chicago.

Taking over the expansion Sabres in 1970, Imlach posted a .269 winning percentage in two seasons behind the bench.

After winning 3 Stanley Cups in 7 seasons in Detroit, Ivan was hired by the #Blackhawks to lead a rebuilding effort. pic.twitter.com/0M7tjIObjR

The jury is still out on how Coach Q will fare with his current club, the Florida Panthers. He led the St. Louis Blues to a Presidents’ Trophy and won three Stanley Cups in Chicago.

On this day in 2004, the @Avalanche hired Joel Quenneville as the club's new head coach #Hockey365 #GoAvsGo pic.twitter.com/dkdLEieGdK

Colorado was another story, though. Quenneville missed the playoffs in two of his four seasons while handling the Avalanche bench.